A couple of weeks ago the publisher of Ally Beaven’s new book, Broken got in touch to ask if I would like to review it. Broken is the story of a number of the Fastest Known Times, or FKTs that have fallen in 2020. Predominantly fell/trail and ultra long distance it’s a topic that ticks all my boxes, so of course I said yes!

For disclosure purposes the book was provided to me for the purpose of the review, but all the words and opinions are my own.

During 2020 with the COVID-19 pandemic ongoing, all but a handful of races were cancelled along with most other mass-participation events. With social distancing being required to reduce the risk of virus transmission it was simply not possible to have hundreds (let alone thousands) of people stood together on a start line. And this is ignoring the logistical matters of routes crossing public places, supporters wanting to line the streets plus all the less obvious aspects such as aid stations staffed by volunteers, again in close proximity. Even fell and trail races had to be cancelled, despite the numbers of runners being generally far fewer than the big road marathons. 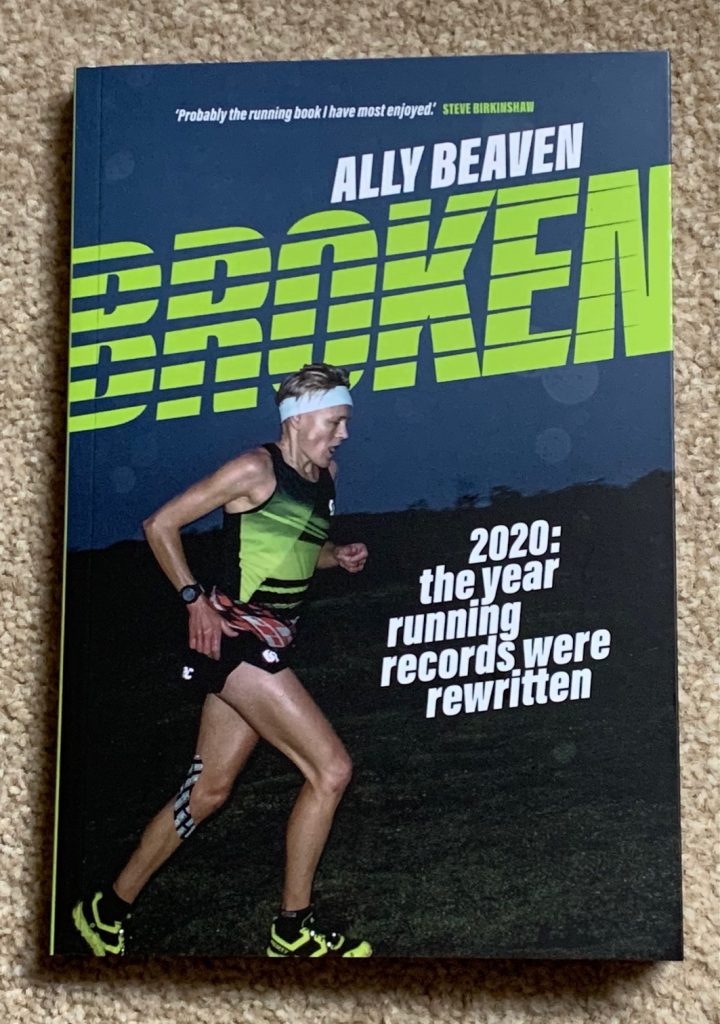 Runners are competitive athletes whose training is usually devoted towards race day. So without races to focus on that competitive urge needed to be met elsewhere. Fastest Known Times (FKTs) have been one of those outlets along with virtual events and home-baked challenges such as running a marathon on your balcony. All about finding an outlet for the running.

So what is a FKT? Take a fixed route e.g. the Pennine Way, or a concept e.g. running all the Munros in one go and aim to do this as quickly as one can. The book goes into a bit of depth about the origins of the term FKT versus that of a ‘record time’.

As you can imagine, with the focus of athletes shifted from the non-existent races to tackling FKTs, a fair few of these were broken, and it is this that Ally Beaven’s book visits.

Each chapter of the book broadly tackles one of the FKT stories. Famous names (in fell running circles at least) such as Beth Pascal, Sabrina Verrjee and Donnie Campbell feature along with many others. Due to lockdown restrictions the amount of time in the year to undertake these runs was quite limited, which meant FKTs were happening concurrently and some of the stories become intertwined. The nature of the world of fell running means that people crop-up in each-other’s attempts to help support. The world of FKT is evidently more focused on improvements to those record times than being precious over an existing one.

There were a number of nice touches that made this book much more than a catalogue of people running long-things faster than done previously.

Some of the FKTs such as the double-assault on the Pennine Way FKT were mentioned only briefly as they had been covered considerably elsewhere. This enables the book to tell the reader about the numerous other FKTs that were less well known, at least outside of the fell-running world.

The author’s tone is very light-hearted; conversational rather than documentary, which makes for an enjoyable read. It portrays a much more personable view on what went on, shedding more like on the individuals involved rather than just the high level facts about the FKTs themselves. And this is not just about the runners tackling the FKTs, but also the significant others helping out as well. Many other runners were involved supporting on the runs (carrying food, supplies, extra kit, assisting with navigation) whilst friends and family acted as mobile aid stations, logistics managers and generally making sure the runner could just focus on running.

Indeed, the author was involved as a support runner on several of the FKTs which gives the reader a much greater insight into what goes on within such an attempt. And also why so many in the fell running community are willing to help each other achieve these incredible feats. There is also a discussion about how/if the experiences of FKT-chasing in 2020 will shape the training and ambitions of runners in the future.

I thoroughly enjoyed reading ‘Broken’. The details from each of the featured FKTs had the right balance of narration and explanation and give the reader an insight into those runners taking on each challenge.

If you would like to purchase a copy of broken, you can find it here.

Be the first to comment on "Broken, by Ally Beaven – Book Review"