Happy New Year. I’m hoping that there will be a lot more activity in 2023. Both on this website as well as on the trails. If you’ve read my recent post about dealing with heel bursitis, you’ll understand why I’ve not done much in the way of running, let alone racing. 2022 was a 2 races attended out of the 5 booked due to a combination of the bursitis along with a dosing of covid in the autumn.

With having the ‘diagnosis’ of a Haglunds Deformity given to me in the summer, it got me searching around online about this condition; something I’d never heard of before. And because I don’t study other people’s feet, I never really considered that the weird shape of my heels was anything other than normal. As a sidenote, whilst on holiday in December, I made an active decision to ‘notice’ other people’s feet and it appears that it’s true, the rest of you don’t have wonky-shaped feet! Who knew!!

Anyway, having watched a few YouTube videos by Vanessa Bogenholm who has documented her running and rehab living with a Haglunds Deformity I began to work through options that would hopefully allow me to protect the heels better whilst running. I’d already started the regular icing of the heels (what joy!) and it was interesting to see that she tapes her ‘heel bumps’. That said, the positioning of mine are more central and as such don’t appear so pronounced. So for now, I’ll only be taping mine when I start to do longer distances again (currently I’m only doing about 8 miles maximum per run, but that needs to increase if I’m going to get to either of my 2 remaining races that were pre-booked for this year).

I have surmised that they may actually be my final two races unless I can get to grips with the feet issues. But that’s another matter.

Anyway, let’s get back onto the point. I’ve used heel raises in my shoes for some time but began to think about whether a more supportive insole would help. Vanessa mentioned that she’d previously used custom orthotics however due to a location change her had since found a good off-the-shelf option. So I went off to Amazon to have a look to see what was out there.

The option she liked was coming out at about £26. Not expensive for orthotics but not a cheap option if you don’t know if it’s going to work. And Amazon reviews are not overly helpful with most of them either loving or hating them, with very little in between.

My attention was however grabbed by the Gr8ful Orthotic Insoles. 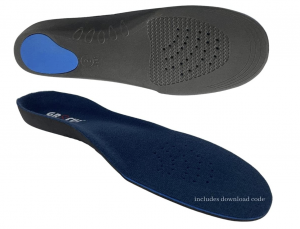 At £7.99 they were a third of the price, which for a shot-to-nothing is a bit more palatable (that’s probably the fell running in me talking!!!). But what attracted me more was that they were designed by a fell runner who had been battling plantar fasciitis. While this is a different “injury” in that it’s the fascia under the foot that’s become inflamed and unhappy, it connects through to the Achilles and up the back of the calf muscle (broadly speaking!) and thus relieving pressure under the heel for that will also help with the pressure at the back of the heel as per the bursitis.

The issue I generally find when trying to sort things out with my feet is that the vast majority of the products and the information provided is for road-running. Road shoes tend to be very firm and supportive under the sole, whereas trail shoes tend to  have a lot more give, in order to grip an unlevel terrain. If the shoe is flexing about, a rock-solid orthotic may not be the right solution. I don’t know for sure, but if its designed to be in an unchanging environment, it’s going to potentially have issues when the sole is bending up and around rocks etc.

So I ordered some in medium size (I’m a size 9.5 in trail shoes and the medium was for sizes 7-9), and they arrived promptly a couple of days later in early December. Packaging was minimal, with the insoles inside a card inlay with some details about the company and links to their website shop, all inside a non-recyclable plastic sleeve. 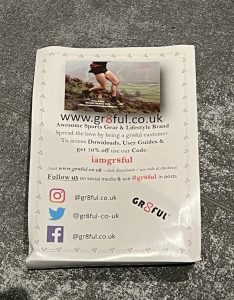 The plastic is long gone, but I thought to keep the card info sheet

The insoles are raised around the heel and in the arch, thus relieving pressure on the heel whilst supporting under the arch of the foot. As I have a very high arch this also ought to help. 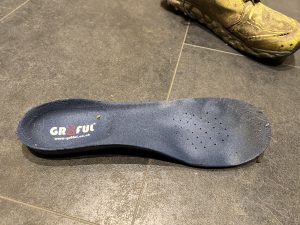 It was a case of pulling out the insole that came with my Altra shoes and replacing with the new one. The existing insole was a millimeter or two thick, thus not giving  much in the way of cushioning. It’s worth noting that I pulled out the insoles of my daily wear trainers (which have the back of the heel cut out….) and they were equally lacking in substance. For those trainers I’ve got some shop bought insoles from Aldi which do a similar job to the Gr8ful ones, although they are less flexible. The medium sized Gr8ful insole fitted inside my Altras without issue or needing any adjustment. I’m glad I went for medium, I wonder if the large size would have been too large given they were for shoe sizes 10-11 (compared to my 9.5) and would thus need to have been cut down to size. 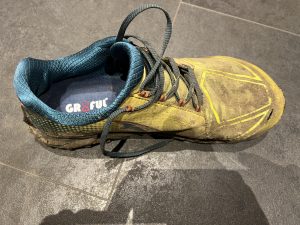 Insole inside my Altra shoe

As I’m used to wearing a heel raise, I’ve brought those across in addition to the insoles (in both sets of trainers actually). I figured if it was too much I’d notice pretty quickly but actually it seems right for my feet.

Now I’ve not done any mad fell running. Having had most of the last 2 years out with different foot problems just getting out on light trails for an hour a couple of times a week has been enough for my feet.

But thus far, the Gr8ful insoles seem to have kept my feet feeling a lot better than they were. I find the insole comfortable and I don’t think about it or the bursitis when I’m out running. Part of this is realistically the burstis gradually calming down, but I definitely feel better supported around the back of my feet. And that was ultimately the goal here, to rehab the current situation and then maintain things in a way which hopefully will reduce the likelihood of recurrence. Especially given I’m not really sure I understand why things flared up in the first place.

So if you’re struggling with plantar, or you have wonky feet like mine (Haglunds isn’t particularly uncommon), these seem to be an inexpensive insole which, from my testing over the last month, seems to have helped my feet out.

Disclaimer: All the above words and opinions are mine. Gr8ful have no idea I’m writing this review, I purchased the item for my own use, but thought it was probably worth writing about!

Be the first to comment on "Product review: Gr8ful orthotic insoles"