A couple of weeks ago I ran with Peak & Valley Trail Runners on Kinder. But in dashing out at the last minute I left my Garmin Fenix 6 Pro (F6P) on the side and ended up recording the run with my Apple Watch 7 (AW7). In my blog post about it I commented about how hideously bad the AW7 distance recorded was out compared to the other runners’ watches (about 20% longer than everyone else) and I finished the post with an intention to find out what was going on and whether the AW7 could produce reliable results.

A bit about GPS

Doing a bit of reading online suggested that it was the incestuous relationship between AW7 and iPhone that might be the problem. The general message appeared to be that, in order to save battery on the watch, if it was in contact with a paired iPhone, the watch would use the phone’s GPS connection instead of its own.

And it turns out that the GPS on the phone isn’t really up to accurately mapping routes. I’m not sure if it’s any better when traveling on roads. My guess is the sampling rate is much lower on the phone, in order to preserve battery life.

Although I’m  probably over-simplifying things, your GPX trace i.e. the plot of your route is calculated by an individual plot of x,y,z coordinates recorded periodically. On modern GPS watches this is every second, although there are options to reduce this frequency to save battery life.

If you’re moving slowly, or heading in the same direction for long periods e.g. straight roads, the accuracy shouldn’t be too different. The problem is if you’re following a complicated sheep trod that’s jittering  up and down the hill, if only a few data points are recorded, much of that jittery detail is lost as each data point will be linked by a straight line. Moving more quickly as well, the ground covered will be bigger, further exacerbating the problem.

So I suspect this is why the phone-linked option yields poor results, although I’m somewhat confused why it routinely OVER estimates the distance (ancedotal evidence from a couple of my Lyme Runners who used their phones to record their runs seemed to alway result in a longer distance recorded than all the watches on the same route).

So if that’s the hypothesis, then it’s time to run some real-world data comparisons and see what we get. In both cases I put the iPhone into  ‘Airplane’ mode (turning off bluetooth would work too) so that AW7 uses it’s own GPS receiving system.

The first run was in Lyme Park. Most of the runs we do here follow well established paths as we don’t want to disturb wildlife, nor wish to come home with bodies covered in ticks! 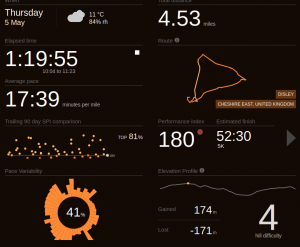 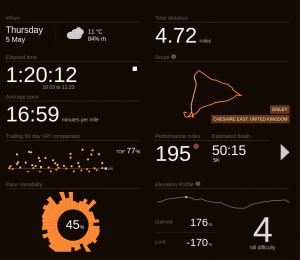 So a couple of things to cover here.

Firstly that I’ve pulled the data into Smashrun for a side-by-side comparison. I just figured it was easier than trying to compare data fields where the information is shown in different places.

Secondly, the start time is slightly out with the Garmin starting slightly later once it had locked onto its GPS. One of the “problems” with the AW7 is that it says it’s ready to go immediately upon starting a workout. So without starting and immediately pausing it for a minute or so there’s a question over exactly when it’s acquired enough satellites to accurately know where it is. I didn’t do this tweak on this test.

So in 4.5ish miles there’s 0.2 miles discrepancy, or about 4% overstating of the AW7 over F6P. I’m pretty sure that most of this appeared from the word go i.e. it may have been introduced the error during the 17s between the starting over the two devices and that we don’t know at what point AW7 actually had acquired enough satellites to be accurate.

Not perfect, but far better than when AW7 was attached to the iPhone (that was about 20% discrepancy).

A week after my first run with AW7 on Kinder, we were back as a group looking for the Mermaid Pool, a small lake a drop down from the Plateau. Again I took both AW7 and Garmin F6P with me (opposite wrists) and I put the iPhone into airplane mode again. But this time I started the AW7 just before we were ready to set off, but immediately hit pause. That way, the plan was that once we started the run both F6P and AW7 would have acquired a satellite lock and know exactly where they were.

So this is how things came out in practice. Unfortunately I seem to have deleted the smashrun screenshots I took before I deleted the duplicate file. So I’ve had to go back to the files recorded on Garmin Connect and RunFit (AW7 healthkit data seemingly impossible to find after the event…..!) This is why I did the other one the way I did. Oh well!

So you might need to zoom in on the screenshots. Yes I know they’re all in metric, it’s confusing me just as much as I use imperial for my running. Don’t judge me.

So let’s compare the results:

So we can see that things are, on the whole, pretty consistent. Let’s ignore the cadence numbers for now because they’re clearly very different. But in terms of the actual distance there’s a 1% discrepancy which, given we were running up, down and across a mountain it’s good; the range across the groups garmin watches will likely show as much of a spread.

Oh and yes, we found the Mermaid Pool: 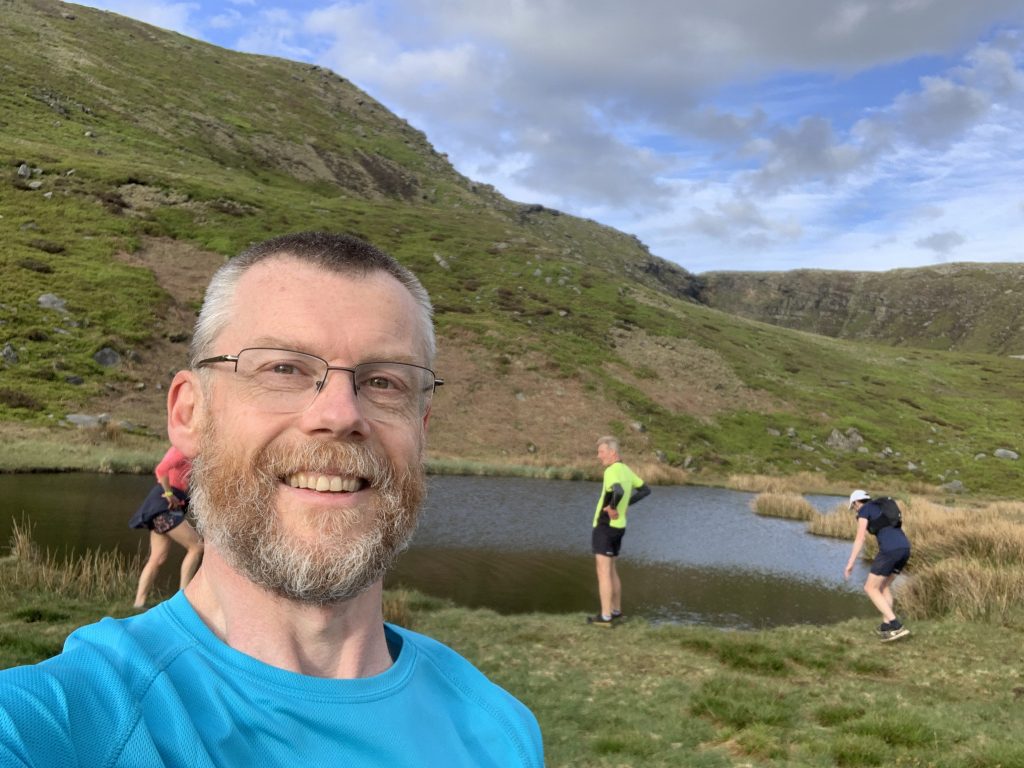 At the Mermaid Pool

So, it does appear that the AW7 can be pretty accurate after all. You just need to let it do it’s thing and not let the phone over-ride when it comes to looking for GPS satellites.

It’s an easy enough fix but at the same time I think it’s a real shame. You see the AW7 does have a pretty capable fall-detection mode. The theory being is that if it detects a serious fall it can send out an alert to get help which is useful if the wearer isn’t in a position to be able to do that themselves. but of course, once separated from the phone, unless you have the cellular AW7, it won’t be able to make that call. Which is a missed opportunity unfortunately.

It’s actually a real pity that there isn’t a setting on the AW7 which would allow the user to over-ride this setting, to force the AW7 to use its own GPS rather than piggy-backing off the iPhone. Sadly that’s not Apple’s way; they like to play big brother and to make all the decisions for you. Unfortunately it appears these decisions are not always as helpful as they would like us to believe.

Be the first to comment on "Apple Watch 7 vs Garmin: Another GPS test"