It’s been a long time coming. I’ve not run with Peak & Valley since last spring when my foot was still refusing to play in the hills following the injury in January 2021. It’s been very frustrating as running in the hills is my happy place.

Back in 2021, I resumed my running in August as I tried to find the endurance I’d need to get through Escape from Meriden. And it worked, at least to a point. But as the foot would only tolerate flat terrain without random aching it meant that the majority of that training was all on tarmac. Hardly my happy space!

At least with restarting the Lyme Runners group I was able to at least begin to venture off-road. The advantage with leading this group is that the runs are generally much shortly than the sort of runs I would ordinarily do; 3-4 miles rather than 8+ miles. So it was a gentle reintroduction to the terrain without pushing things too hard.

Did I really enter that?

The complication is that in 2022 I have a number of long hilly races that have ended up in the calendar. I say “ended up” because of race postponements due to COVID in 2020/21. Although the first of those races (PWIAD) I ended up having to miss due to an inexplicable “injury” that I seemed to acquire 24 hours before the race. I have, of course, already rebooked it for 2023 but in the meantime the organisers have created a summer event this year as well. This works for my circumstances as it’ll be a night race, so hopefully work won’t derail it. Although i still need to build up to that sort of distance……

More pressing is the other carry-forward race, GU36 which is in 10 days time. Although my preparation isn’t where I would have liked it to be, I had thought things were going reasonably OK in March, with tackling Grindleford Gallop and then a 24 mile hilly meander along the Cown Edge Way the week after. But oddly since those great runs, the energy / enthusiasm seemed to dip throughout April and I only managed a few shorter runs. I think GU36 will be fine, although it’s unlikely that I’ll be remotely competitive. It’s more something I want to complete and enjoy the experience for what it is. And prove to myself that I can come back from this long-term injury.

But I digress. I finally got out with Peak & Valley Trail Runners yesterday.

One of the reasons for not having joined them recently is that a good number were all focused on marathon training. As I’ve explained before, for whatever reason, my body tends to suffer with the training for road marathons to the point that I prefer not to go for them these days. The risk of writing myself off in pursuit for a “a good marathon time” is one I’m no longer willing to take. Much more preferable to get out and do the running I enjoy rather than risk being unable to do anything! But they’re all back from Boston and hungry for hill running, so it was great to join them up in Hayfield at the start of one of the trails onto Kinder Mountain.

I was in a bit of disarray before I set off. I managed to leave things a bit more last minute than I ought, forgetting I’d be traveling at rush hour. And in dashing out of the door whilst I did remember my running shoes, I forgot to pick up my Garmin from the sideboard, and only realised this when I was half-way there! Schoolboy error!

But all wasn’t lost as I was wearing my Apple Watch 7 (AW7) which has GPS tracking. So I knew I could record something of the trip to find the (somewhat elusive) Dog Stone up on the hills surrounding Kinder.

Now it’s worth making a couple of comments about the AW7. I recently upgraded from the AW5 which was a watch I’d had some reasonable results with the GPS. I didn’t run with it much (I had a Garmin F5 after all) but on the few occasions i did, the GPS was as accurate as the Garmin.

The same hasn’t been the case for the AW7. In all the runs that it had been co-piloting with the Garmin, it always seemed to over-estimate the distance. By about 20%. To the point where I was wondering whether it might be thinking it was recording in kilometers even though it was displaying in miles!

One consideration I had was that in all of these runs, I’d not started the GPS recording on the watch. In most cases I’d actually forgotten to take off the AW7 and so it had unwittingly come on on a run, and part way through had buzzed me to tell me that I was running and would I like to start the recording?! So I questioned whether this lack of accuracy might be due to that.

8 go hunting for the Dog Stone

Yesterday’s run was different though. Here the AW7 was centre-stage in the run recording and I actively told it to record as we set off.

Our first task was to find the Dog Stone. To all intents and purposes we were looking for a pointy rock on the side of a hill covered in pointy rocks. And lots of deep holes. Maps were out, but it was due to the unusual approach of bringing along a photo of the hill on A3 paper that we actually found the Dog Stone! 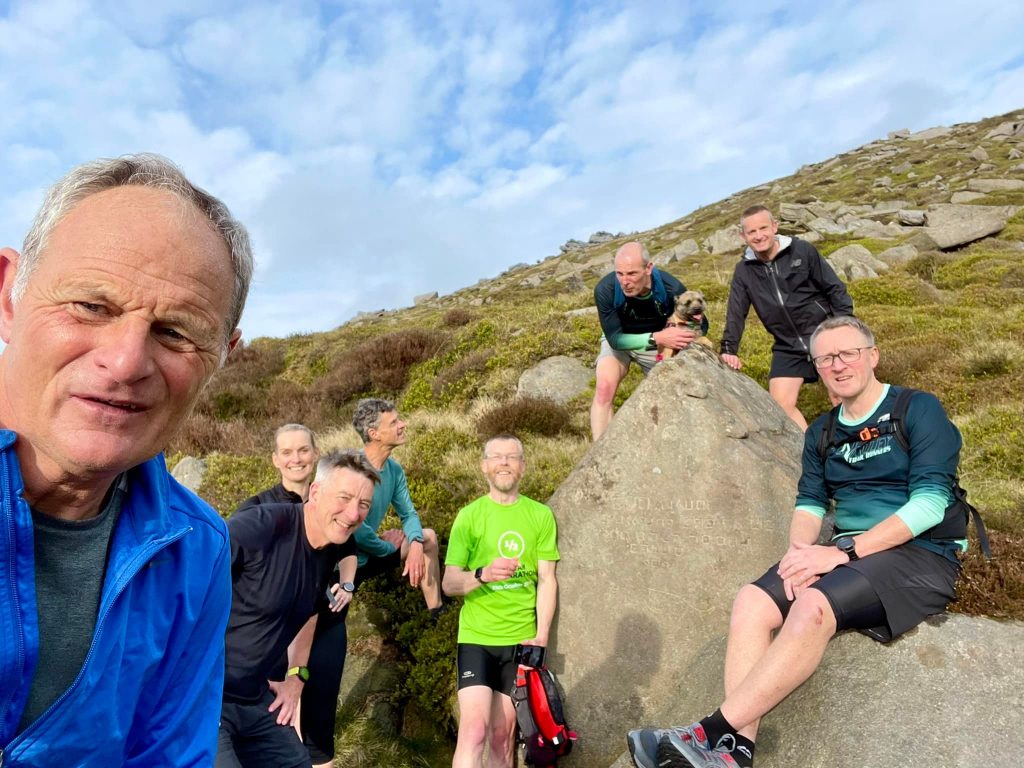 P&V and the Dog Stone

So there we go, a pointy rock amongst pointy rocks, but this one had an inscription and the drawing of a dog on it.

The run had all the great hallmarks of fell running, picking a route, enjoying the scenery whilst not falling down any big holes and  several wet feet due to crossing the rive about 300 times (OK, I might be exaggerating). It really has felt such a long time since going out and doing a group run like this, and I’ve missed it dearly. My fitness wasn’t where it was, but it was a social run and we stopped and started, enjoyed where we were, tried in vain to spot the Cuckoo that was calling throughout our run and generally had a lovely Tuesday evening in the hills. It was brilliant!

Once we had got down from Red Brook and rejoined the path following along the edge of the reservoir, conversation turned to the distance traveled thus far. The consensus of 6 Garmins was about 4 to 4.25 miles. So a bit of a spread but roughly in the same ballpark. Meanwhile AW7 proudly displayed 5.5 miles, which drew the understandable derogatory comments about AW! I mean seriously, even with the run being intentionally started at the same time as everyone else, the 20% inflation in distance was there. WTAF is going on?

A more rapid run along a relatively flat path ensued before rejoining a stony bridleway which was a little too exciting for the grip of my Altra Superior 4s and then finally a tarmac road back to the car park. The suggestion was from our previous stop was that there was three-quarters of a mile to go i.e. total run distance of about 5 miles (8km). I thought I’d wait and see what AW7 would come up with.

In the end, the consensus was a total distance of about 5 miles, as per the previous estimate. Meanwhile, AW7 decided it was more like 7.4 miles!

Having got home I hit the internet to see if anyone else was experiencing this excessive GPS measuring. In terms of today’s run it was met with humour but if one is relying on getting their distances from GPS (definitely not the recommended approach) this situation could become very serious indeed. Initially all I could find was people reveling in just how accurate the AW7 GPS was compared to previous models. And bearing in mind my previous AW5 always seemed bang on the money, this was just a tad frustrating.

But then a possible breakthrough, and certainly something I’m going to do some testing with to see if this is the problem.

In recent years I’ve made sure I’ve brought my phone with me, just in case of an accident. having a mobile phone isn’t a guarantee that there will be any signal (another reason why it’s not a great thing to rely on for navigation) but there’s more chance of making an emergency call than if said phone was sat at home instead!

It transpires that the default behaviour of the AW7 (and I presume its predecessors) is that if it’s paired to the phone that is with you, then AW7 ignores it’s own GPS readings and instead uses the GPS of the iPhone……. Now, exactly why the phone’s GPS would be inferior is debatable, but the likely reason would be the sampling rate; my Garmin is set to check GPS every second, which obviously has battery-life ramifications, but it effectively means that the watch has a confirmed location every second. In contrast, I’m not entirely sure how the phone gets it’s position. Sure it knows about GPS, but it also gets it’s position from the various broadcasting masts. And whilst by triangulation each position ought to be accurate, I wonder whether this is borne out in practice.

There were also some suggestion to reset all the fitness measurements on the AW itself, but I think this is probably more in terms of estimating the calorific burn rather than whether or not the watch knows where it is.

So the follow up to this, by way of an experiment, will be to turn off the phone, or at the very least to put it in “airplane mode” and see how AW7 measures the distance compared to Garmin, using its own GPS connection. Hopefully next time I’m out in the hills I’ll not forget my Garmin so I’ll have data that can be directly compared (although it’s a pain that I then have to delete one copy from Smashrun as both devices will push the workout data to the platform). At least that way it will help to confirm whether or not the AW7 is capable of recording an accurate GPS trace and whether it’s anything to do with the phone messing things up.

So, a post that started out about running in the hills, but then ended up in tech purgatory. I’m sure you wouldn’t expect anything less from me! is it frustrating? Sure as heck it is. But if I can prove what processes are derailing what ought to be something straightforward, so that you don’t get hit with the same problems, well I guess that may be useful to someone!

It’s great to be back!