Running authors have been keeping me busy this spring. After Matt Whyman’s release in April, Rachel Ann Cullen’s new book “Running for our lives” hits the shelves on 5th May. Vertebrate Publishing sent me over a pre-publication copy of the book for me to read and review, and this is what I’m going to do now.

I feel I’ve known the author, Rachel Ann Cullen for years as we’ve followed each other on Twitter for a long time within the running community on the platform. On social media she is a bubbly and supportive person, always out running in her beautiful Yorkshire and seemingly enjoying the world. From this you might imagine that she couldn’t possibly have a backstory fighting her demons to get from a very dark place to where she is now.

But this isn’t the case. Back in 2018, Cullen’s first book “Running for my life” was released and took the reader through her struggles with her own mental health and how she found that running helped her to manage her “chimp” from controlling her life. For Cullen, this was cathartic and proof to herself that she could do it.  Perhaps what she hadn’t realised was just how much her story would resonate with other people, something that would become apparent as the messages started rolling in from around the world.

Running for our lives

Cullen’s third book, “Running for our lives”, is the telling of some of the many stories that came back to the author off the back of her original book. The author made contact with those individuals and arranged to interview them about their lives, their struggles and fundamentally how running was pivotal in their “recovery”. Recovery not really being the right word in many of the accounts where tragedy within those people’s lives has been the cornerstone of their story, and ultimately their running journey; one doesn’t merely “recover” from, for example, a bereavement, but instead one learns to accept and cope with it.

Interspersed with these stories, the author adds in threads from her own life experience, but this is done in a way to help explain/support what has occurred in some of the other people’s accounts. There are also candid comments about some of the potential pitfalls that might be encountered where running has been introduced as a non-medical co-treatment to mental health issues.

When I started the book my initial thought was that it was going to be a collection of short stories. I quickly realised it was much more than this. Rather it is a celebration of the power that each person has found through running, to be able to move forward from the adverse events that have occurred in their lives. From a personal point of view, I realised that the positive mental health benefits I discovered from running after my own illness in 2015 (and before it was something that was widely shared in the media) clearly can help many people, if not all.

I thoroughly enjoyed reading the accounts and hearing how each person was able to find strength through their running.

You can buy Running for our lives directly from the publisher from this link. 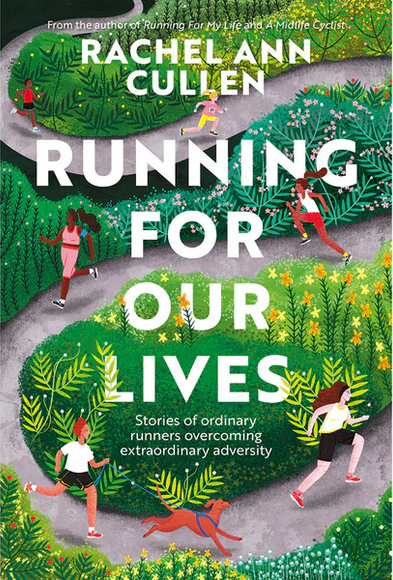 Be the first to comment on "“Running for our lives”, by Rachel Ann Cullen – book review"