2020 was a very different year for all of us with the impact of the COVID-19 pandemic affecting most parts of everyone’s lives.

The ultra-running world was no exception; with no races to be had globally, runners went looking for other challenges.

Damian Hall, also known as Ultra Damo on his social media, was no exception. His new book “In it for the long run” follows his transformation from being a recreational football-playing husband and new-father, into becoming an internationally successful ultra-trail runner who has represented his country. All made more incredible given he didn’t start distance running until his mid-30s.

For disclosure purposes the book was provided to me by Vertibrate Publishing for the purpose of writing a review, but all the words and opinions are my own.

In it for the long run

After a chapter giving some general background, the book starts off looking into his childhood, where playing football was a way that he felt he could be accepted by his peers. In fact it highlights this as his first obsession. As a young adult, he travels the world looking for adventures, first in mountaineering and then trekking before returning to the UK to work as a sports journalist.

In 2011 Hall runs his first half-marathon in Bath and the start of a new obsession begins. A marathon follows. Then an ultra-marathon. Having written a guidebook about the Pennine Way, Hall soon becomes obsessed with the Spine Race, until this was replaced with an obsession about the Ultra Trail Mont Blanc (UTMB) which culminated in a 5th place at this prestigious event in 2018.

Alongside his racing prowess, Hall soon discovered the attraction of personal challenges such as tackling the three main UK Fell-Running Rounds as well as the Fastest Known Time for the Pennine Way in 2020, a topic to which the book builds towards as its finale.

Hall adopts a very conversational tone. I found the first couple of chapters were a little convoluted for my taste. However, once into the start of Hall’s running career, I felt the flow improved significantly. Hall has a rather self-depreciating tone where it’s clear that he’s surprised at his success, even if everyone around him is sure of it.

The book paints a very balanced view of Hall’s running experiences. He covers the full spectrum of emotions experienced during the runs rather than just basking in the afterglow once the pain has faded. Hall’s mixed experiences about being coached were also very interesting; not everything was beneficial and his commentary serves to remind the reader to understand what is being suggested by a coach and to question it if it doesn’t seem right rather than to follow blindly.

Hall highlights his concerns about the environment and climate change which is clearly a driving force in his life now. Rather than interspersing it throughout the book he introduces it as a topic in its own right, something which keeps the main part of the book focused on the running, whilst providing additional context in the later chapters. I found this worked well as it addressed the topic head on, although Hall highlights this to the reader and advises if they don’t want to know about his environmental views to skip to the end of that section a few pages later.

The final chapter concludes with Hall asking a number of ultra-running friends (many of whom had featured elsewhere in the book) why they participate in something that is “long and hurty” and their thoughts on personal challenges versus organised events.

I really enjoyed “In it for the long run” which was on the whole an entertaining, yet down to earth read about an athlete doing some incredible feats of endurance.

“In it for the long run” is released on 6 May 2021 and is available for pre-order from V-Publishing’s website. 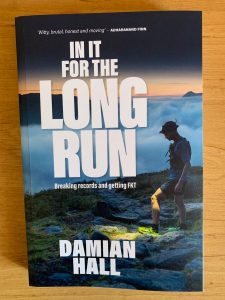 In it for the long run

Be the first to comment on "“In it for the long run”, by Damian Hall – book review"