If there’s one thread that’s come through 2021, it’s that whilst my foot has been refusing to heal, I’ve been doing music!

Admittedly I was half-way through recording ‘Beyond the Light’ when my left leg inflated like a balloon and decided to be unhappy at the prospect of using it, but it certainly allowed me to finish the work without being distracted by going out for a run.

There was a glimmer of hope in April when the foot seemed to be OK doing some light running, and getting back to losing the weight I’d put on whilst doing no exercise seemed a possibility. This was short lived; despite regularly walking on the hills in Lyme Park whilst undertaking one of the voluntary roles I hold with National Trust, it appeared that as soon as I tried to run on any terrain that wasn’t flat seemed to upset the foot. It was fine during the run, but the days afterwards  were achy and unhappy. Now it might be that there wasn’t anything seriously up, but given I’d been off my feet for 2.5 months after doing it a mischief, I wasn’t too fond of the idea of pushing my luck. 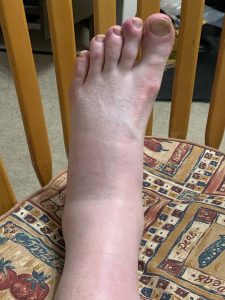 As it happened in May, the UK started coming out of lockdown and the nation started to go on holiday. As such my day-job went from dormant to phone-melting in a matter of a few days. So the opportunities to run for myself were limited and I stuck with the coaching at Marple Runners where hopefully I could help other runners out whilst not doing myself any further injury.

By the time my peak-season of work was really going into overdrive, a couple of running friends did talk me into trying to get the foot looked at. I’d left it for 6 months as I’d made an assumption that this was a tendon issue, and having torn a ligament in the past, I was bluntly told it would take 6 months to heal, so go away!

A call to the GP surgery explaining the situation and asking to be referred for a scan didn’t  provide a fast resolution. I was told I would have to have a telephone appointment with a physio for the initial assessment. This despite having told them everything they needed to know, and whislt I got to have this “appointment” 2 weeks later, the result was that I’d “have to go in for a physical assessment”. No sh*t Sherlock!

The in-person assessment, a further 2 weeks along the way was an exercise in demonstrating all the things I’d explained in my initial correspondence with the surgery. The physio ruled out all the big things I’d already ruled out i.e. stress fracture, broken foot, missing leg etc. Net result was that I would “need to go for a scan”……….

So a month down the line and I’d managed to get to next base. Except that due to all things COVID there was an 8 week waiting list for the scan. Oh and following the scan the results would take another 6+ weeks to come back.

Today, 8 October is my scan day. I’m writing this whilst getting myself sorted out to finish off the evening jobs before heading to the hospital.

The stupid thing is that I CAN actually run on the foot, as long as the terrain isn’t lumpy. Which, for a hill runner, isn’t entirely what I’m after. I thought I’d waved goodbye to road running yet currently it’s all I can really do without waking up to an angry foot. So 10 months since the injury, I’m not sure I’m any further forward. Here’s hoping the scan will tell me something useful. And that it does this sooner rather than later so i can get on with my life.

Of course, there’s no guarantee it’ll tell us anything. Or it might be something that we can do nothing about. Or surgery might be required which then leads on to a whole different discussion about what is reasonable, possible, desirable.

I’ll do an update on this once I have one.