On February 15th I wrote a quick article looking at some of the running software available online / on mobile devices. I thought it was time for an update on this to give a little bit more feedback on what I had found.

The reason for this is twofold. Firstly I think it’s often rather useful to review what one has said to confirm whether or not it remains valid. Secondly, I have started experimenting with Heart Rate Monitors (HRMs) and whilst there is a lot of information out there, I struggled to find what I was looking for.

There’s potentially a third reason which is that I’ve started cycling as well, and that has impacted my choices as well.

The Nike+ watch has been doing a sterling service with me since November 2012 when it became my method of choice to record my running (I’d previously used the android version of Endomondo on my mobile phone).

The Sportwatch was convenient because I found it a lot easier to operate whilst running and I could also see the output more clearly than on the phone screen which was strapped to my left upper arm (I hesitate to use the word bicep in case it’s classed as a trade description error!)

It was only after my last article that I discovered that heart rate monitoring was also possible with the smart watch. Unfortunately the choices were limited, seemingly to one device, the Polar wearlink (works with NIKE+) device. Both watch and HRM use an old bluetooth standard which limits their usage to this partnership. Polar have a large number of devices each of which seem to work with a variety of different devices, so it’s really a matter of checking on their website to see which one is appropriate.

The HRM is picked up as another sensor (the GPS signal and Nike+ footpod being the other two) and once connected up it all works as one would expect with the data being recorded as such.

As I mentioned previously, I’m not a great fan of the  Nike+ website and so use Smashrun and Strava to import the data and this all goes across easily. I’ll cover this below. In my last article I noted that of the online software Smashrun ticked a lot of boxes for me due to the amount of data analysis being done. I still like it a lot although for most sports-people, they might find it a bit too dry. There is very little ‘social media’ type interaction compared to many of the alternatives where ‘friends’ are  ‘added’ with the result of tracking what each other are doing and with the possibility of friendly competition.

Smashrun is purely aimed at running, which given the title is of no great shock or surprise! It has a direct synchronise function with Nike+ which occasionally breaks when Nike+ break it, but the team work quickly to smooth out such issues. As such, Smashrun just works. No messing, press a button and the data is all there, including heart rate information, intensity and statistics.

To be honest, for a pure runner, you probably wouldn’t need anything more than Smashrun, I still like it a lot. It exists only as a website, there are no apps or specific hardware for it which makes it ideal for the Nike+ and Polar Wearlink combination. When I last reviewed Strava, I think in retrospect I didn’t really grasp it’s capabilities. Since then, I’ve spent a lot more time with it (as with Smashrun I’m a premium member so have full access to all the options).

For those who haven’t used Strava, it’s very social media friendly, posting your ‘friends’ training details on your Dashboard as well as allowing ‘Segments’ of routes to be named such that any athlete who covers that segment will be entered onto a leaderboard compared to all others who have completed it. This in itself provides a level of rivalry, but across the Strava community itself rather than just the people you follow on the site.

Strava was originally a cycling app, and spawned a running app sometime later before combining them into one in version 4 of their software. The net result is that from the Segment point of view, you’ll probably struggle to find an inch of tarmac in the UK (and probably worldwide) that hasn’t been entered onto the cycling database, whereas it is much sparser from a running point of view. Yes the databases are (sensibly) totally separate for bikes and legs.

Strava the website will take data directly from the mobile app and I think this is probably the way a lot of people will use it and it is seamless. Alternatively it will import GPX files and synchronise with a number of devices, although not with Nike+. To get the data out of Nike+ requires a workaround extraction of the data such as Matt Stuehler’s simple to use website.

Strava (app) was traditionally compatible with only a few HRM devices e.g. Zephyr however this all changed with version 4 when it became compatible with Bluetooth v4.0 Low Energy devices which is basically the modern standard. Strava’s summary details of a ride with all stats available And now it gets messy

I have a collection of different hardware devices for different circumstances. Whilst I could, in theory, measure my bike rides with the Nike+ Sportwatch and Wearlink HRM, Nike+ itself does not cater for cycling at all, and whilst it would probably track the data, it isn’t guaranteed and would definitely not be able to separate out this from the running which messes up all the stats that are generated by the software, and one of the big reasons for doing it in the first place!

However, the Wearlink is Bluetooth v2 which is incompatible with the modern devices including android-based mobile phones.

So I had the decision as to whether to purchase new hardware, and if so, what. One alternative was to splash out on a multi-sport watch (all the big players make them, Polar, Garmin, Timex etc) but we’re talking several hundred GBP to get one and the appropriate HRM.

After a lot of website reviewing I decided what I would rather do was spend a lot less money and get a second HRM which I could use for the bike rides with Strava. The approach feels immensely clunky having different hardware doing basically the same thing,  But it works. Polar Wearlink (above) and Wahoo TICKR (below)

So in the end I plumped for a Wahoo TICKR HRM at a cost of about £50 which was far less than the multi-sport watch equivalent. There was an ulterior motive too which is covered below…..!) This works with Strava on Android 4.3 and gives a good output. It will hopefully remain compatible for the reasonable future, although with the speed that technology changes, that point is ‘anyone’s guess’. The low HR is likely to be due to the signal being triggered from my finger-tips and thus being less reliable. From my teenage years I’ve always had a weakness for technology, and with the work trail-blazed by Apple under the direction of Steve Jobs, technology now is served in a way which is fashionable and much more than just a box of tricks.

Which is why when I saw my first Polar Loop whilst away in Scotland I realised I really wanted one.

I don’t need excuses when it comes to technology purchases, but my old watch had given up and the Loop was a very good looking device (in my eyes at least) with a watch function. Oh and it tracks steps and, along with HRM can track training as well.  You can probably hear the sound of ringing cash tills in the words I am typing!!

Now although there is some possible overlap, with the training software itself, the reality is the loop itself fills a nice gap which is the time when I’m not training but needing the motivation to get up and do stuff. Step counters have been around for a long time, but something which you’re wearing day to day which does this, as well as track an activity target for the day is very useful for putting down the car keys and walking to the local shop instead of driving.

The Polar website highlights its H6 and H7 HRMs but as it happens the Wahoo TICKR talks to the loop quite happily.

Whilst I’ve experimented with the Wahoo and Loop with running and cycling, without the GPS being available it is unable to do what the Nike+ watch and Strava can do. However, work out in the gym, Spin classes etc where the GPS is irrelevant then the Loop comes into its own.

And did I mention it did some (admittedly basic) sleep analysis? 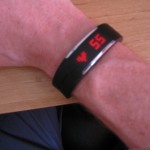 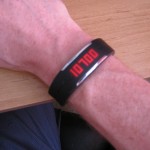 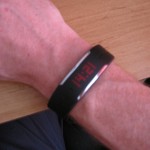 The loop will synchronise directly with the mobile app via bluetooth as well as direct to the website when it’s in it’s charging dock. As usual it’s all windows-only (I guess Mac too)  unfortunately.

I like my tech and my gadgets, but like everyone else has a limited supply of money. Therefore it’s a matter of balancing want and need whilst  getting the most I can out of the kit I’ve already got. Sure, I’d love one device that tracked running, cycling, gym which talked to the internet, got all the routes, all the stats and put them into a nice format that gave me all the details I craved. But really, does that device exist and if so, would I really benefit from spending the money on it, compared to an admittedly piecemeal, but otherwise working solution?

Be the first to comment on "Training software – revisited"