Having collapsed in a heap on the Tuesday night we arose in the morning to survey our home and environment for the next five days.

The War and Peace show is spread across the whole of the old Folkstone Racecourse site which is a large area of land. Directly in front of the grandstand is the battle arena among with food stands exhibition areas and the entertainment marquees, the the rear is the 1940s village, to the left is the stalls of shops. Further away in front of the grandstand is the living history section where many of the larger groups had created their own encampments and way over to the right is Kitchener’s field where the vehicle exhibitors were based. We were almost a mile away from the grandstand at the furthest extreme of Kitchener’s which gives a feel for the scale of the site.

American base with a distant view of some of the living history exhibition.

Kirsty in the midst of ‘A’ Company

Having consumed a large bowl of shredded wheat and agreed for the duration of our stay that civilian clothing was to remain in the suitcases we set out to explore. We began to get to know the other snatch owners who were far more advanced with their own renovation projects which meant there was ample discussion about what we needed to be doing to get our one kitted out correctly. It seems that every one of the 218 vehicles were customised by their crews with a result that they were all unique. Some were green, those that sent to Iraq were sand coloured and we discovered that our vehicle was one of twelve to go to Kosovo as a peacekeeper and painted luminous orange! It is however now, desert-coloured!

Another friend, John, who again takes his uniform collecting very seriously joined us. In full Latvian digital combat uniform, with a pattern which looked like he’d escaped from a game of Tetris. Whilst walking past a stall run by Finnish nationals an excited stallholder who accosted John and having noted he was in Latvian uniform asked him if he drank beer. The Finn then ran to another stall and presented him with a can of Latvian beer. All a tad bizarre but which added to the sense of enjoyment and international community spirit at the event!!

We had taken the snatch out on its first arena outing of the show and paraded it around along with a large number of other armed vehicles which was all very hot until the differential in the gearbox through a wobbler and we needed to be towed back on to terra firma afterwards. 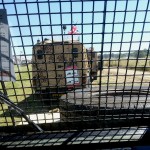 A front seat passenger view of a Snatch convoy 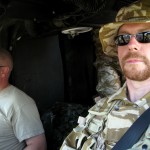 The view into the front seats of the Snatch

Perhaps the most fun part though was that evening when we took part in the Post War Vehicles Parade through the local town of Hythe. There were some 200+ vehicles in the convoy including four of the snatches. The weather was very warm and the town of Hythe came out to see us. Much waving ensued and almost everyone seemed to have got into the spirit with only one van driver giving the convoy a rude hand gesture as he drove in the opposite direction. 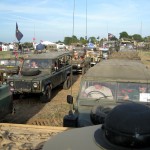 The vehicles behind us in the convoy 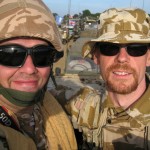 Paul and Me, poking out of the top hatch of the Snatch 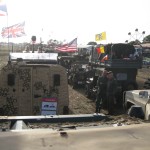 The vehicles ahead of us 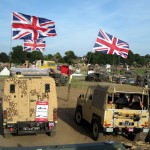 Be the first to comment on "W&P part 2: Latvia? You drink beer? Have a Latvian beer!"