Many parts of the south east were struck by storms on the Thursday night, but we weren’t one of them. We actually stayed up far too late chatting to the other snatch owners and all stumbled to bed as the day was beginning to break desks the promise of an early night following tales of shows, amusement from the YouTube world of ‘Rainbow does Top Gear’ and a subtle rebrand of a genre of adult film-making as ‘Action Romance’, a term that will probably stick around for years to come.

1940s village pub. Am I the only person to have clocked the invasion?

Our attempts at food cooking had only got as far as pasta with a stir on sauce which, on a single hob that ran out of gas midway through took the best part of 90 minutes! The result being that we went to the many excellent food stalls in the show for the rest of our evening meals instead with a view to come back as camping masterchef finalists in 2015.

Friday was stupidly hot. The forecast has suggested 30 degrees and I think that was a fair assessment. Getting around the festival was a covered-up affair with liberal amounts of sun lotion plastered over anything remotely pink. Being so close to the weekend the number of exhibitors increased significantly and the visitors to the site did likewise.

We had planned to visit a friend in Canterbury that evening amongst rumours that a big storm was coming in. Canterbury is a pleasant town with interesting buildings and picturesque streets. It reminded me a bit of Nantwich where I grew up and I took a few photographs whilst I was there too. 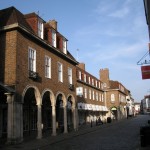 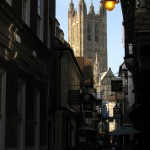 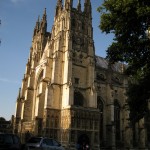 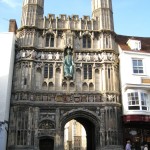 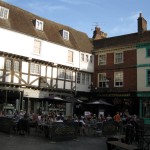 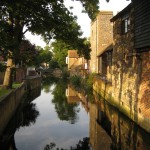 View from the restaurant

In fact the storm reached us as we were leaving Canterbury to return to Hythe and we were wondering what the state of the racecourse was going to be given the amount of heavy vehicles running around on soft grassy areas. By the time we got there the rain had almost stopped but the soft ground was now somewhat waterlogged. The tent had survived and we got to bed.

Now I’m a light sleeper and tend to use earplugs when I’m away as the new sounds from a different area can easily keep me awake. It would appear they did a sterling job as it was only when the torchlight of my friends returning to the tent woke me I discovered that our neighbours camp had been flattened with an overnight storm and our awning which was directly next to my bed area had to be rescued too. I slept through the lot! Ooops!

So the morning was a bit like some form of refuge centre. Our basic setup for breakfast and brews was entirely unaffected by the overnight carnage and we were feeding and watering our neighbours as well as ourselves due to their facilities being strewn across several fields overnight. At least nobody got hurt although there were a few mangled remains of gazebos and tents left near the bins, and a few exhibitors packed up and drove off.

Be the first to comment on "W&P part 3: the storm, a helping hand and some action romance"