Despite the carnage from the night before, the festival was well attended by the public coming to get their fix of armoured vehicles, uniformed personnel and a bit of tank-on-car action which is always good fun, unless you’re in the car in question. 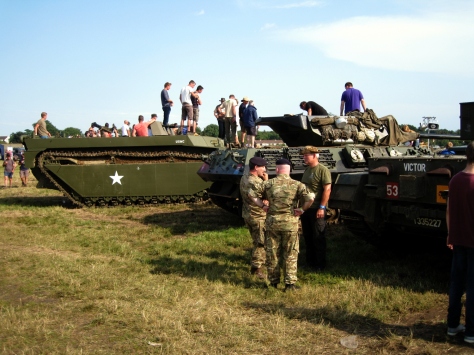 A variety of friends descended on us as we cleared up the remnants of breakfast for the masses and we headed back to the main stadium area. The main road into Kitchener’s now resembled a field at Glastonbury and those trying to get around in sandals were one step away from a comedic face plant into the mud.

We caught up with the battles on the arena and trailed up and down the stalls for a variety of bits and pieces. The weather started off cooler and cloudier, but once I was more than a quick dash to the  tent the sun found it’s way through and we were being roasted again. Thankfully there was more than one place to purchase a spare hat!

Chris had to return home and Paul and I stayed around in the main stadium for some proper food in the grandstand carvery before heading out to the evening entertainment, which as for the previous evenings came courtesy of an excellent covers band. As we sat out to cool down we ended up chatting to a serving soldier who, by his own admission, couldn’t grasp the attraction that brought people in to dress up, buy and fettle decommissioned military vehicles and engage in the festival. Nor could he understand why anyone would want to restore a Snatch, a vehicle he had served in, had lost colleagues in and was basically in his opinion a very poor vehicle that needed to be consigned to history and forgotten about. It was a good discussion only hampered by the amount of beer he’d consumed prior to the conversation, but it was very interesting all the same.

Kevin along with his lovingly restored NI landrover

Paul and I tidied the tent on the Sunday morning for the last time, and packed up most of the big stuff into the Snatch ready for home. There had been more rain overnight making the site a mudbath, not that this deterred everyone and we met a few people visiting who were totally blown away by the event. Even though a sizable number of exhibitors had bailed out of the site early, there was still more than enough to  see and certainly more than you could get around in a day.

Having been unable to find it until the night before, I followed the path through a set-up of WW1 trenches into the Centenary Exhibition. With period artifacts along with a timeline and photographs of the 14-18 War the whole experience was extremely emotive and I found myself welling up inside, which surprised me. But then having been so absorbed in all things military for the past week, perhaps this was a contributory factor.

Certainly getting back out into the sunshine and seeing the Royal Marines Marching Band parade past helped to lift the spirit again. They had, moments earlier, been posing with the cast members of the BBC programme ‘Allo ‘Allo. Some things are just plain odd however you look at them! 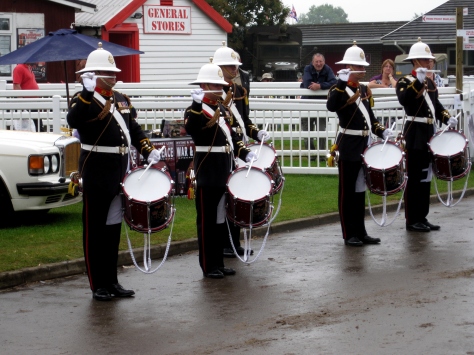 So that was that. I boarded my train just a few minutes after 3pm and left the site for another year. A brilliant festival was had by the group of us. We made some new friends in the process and got even more fired up to do it all again in 2015. And it will be bigger and better than 2014. And Masterchef WILL be tracking us down for the next series 🙂

Be the first to comment on "W&P part 4: A Glasto Epitaph"