Well it’s Christmas which, as usual for most people, has involved sitting around and consuming far too much in warm houses for the last few days.

I say for most people, as I always get complaints from family that my house is ‘too cold’. Apparently being told ‘to put on extra layers’ is not an acceptable answer.

A call to arms, or legs

Back on the 27th November a message went out on the Stockport Harriers Facebook page:

I’m organising at trip to run the 3 Peaks in the Yorkshire dales between Christmas and New Year.
Dates we are looking at are the 28th or 29th December.

Who fancies it ? If you haven’t done it before you’ll love it.

It all sounded rather fabulous and a date of 28th December was set for this jolly.

So at 7am this morning 16 runners converged on Morrisons car park in Bredbury. Despite the organisation being a month old, I think someone had added ‘good weather’ on their Christmas List for today. It was -2C on my car display as I arrived. The sky, cloudless. From a running point of view, I’m not sure we could have requested any better conditions. The route, taking in the peaks of Pen y Ghent, Whernside and Ingleborough could easily have been shrouded in cloud, mist or worse, and it could have been blowing a gale. It was doing neither.

Despite a navigational error, we were all at Horton in Ribbledale by 9.15am and not long after we set off.

Two of the 16 were already planning a shorter route, which many of us considered as a sensible option against the 23 mile 3 peaks route (turns out it was 25 in the end) so as we headed up Pen y Ghent we knew there were choices. 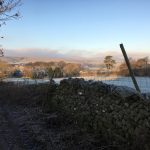 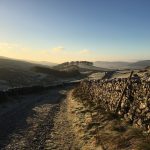 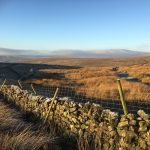 Our first peak began almost as soon as we left he car park and picked up the trail. In fact we’d completed peak number 1 before we’d even covered 5 miles! That said, it was a taste of things to come with a steep path taking us up to the summit. I certainly questioned at this point the practicality of doing the full route. However, the view from the top was also a taster for the day, with clear views all around, with frosty conditions under foot and a cloudless sky letting the winter sun dazzle us. But not in a particularly warming way – it is December after all.

We stopped, had a snack, took some photos and headed down the way we came and back to the main path where we started the main assent.

And off we carried on, up the other side and along a newly pathed-route to protect the bogland around. In fact it was quite a while along this route before it dawned on most of the group that by taking this route, we were committed to the full trip! Oooops! 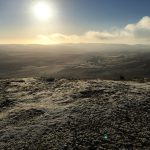 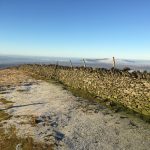 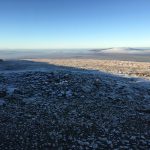 At least the 2 people leading the shorter route got this bit right!!

The next 6 miles took us from the first peak to the second. The terrain was generally flat-ish, or at least rolling, with decent paths leading us through the moorland until we picked up a farm track which took us through various fields. We made good progress through this section as it was easy on the feet, whilst providing jaw-dropping panoramas all about. 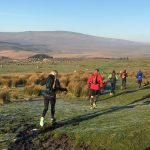 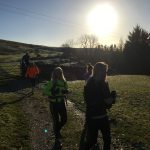 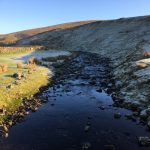 All good things come to an end, and we had to join and follow the main B6479 road for about a mile which isn’t great for running due to the amount of traffic on it. You see this takes traffic right up to the Settle-Carlisle viaduct, an impressive 24-arch brick structure, iconic of the area.

Our route took us right up to the viaduct which we ran alongside to pick up the path for peak number 2. I must admit that from a distance that Whernside didn’t look as uphill as Pen-y-Ghent. However, distance looks can be deceiving. From the viaduct the path took a 2 mile rolling, and increasingly steep path up the side of the peak. I must say that I was beginning to lose pace at this point, with a likely cause of poor fuelling management; or to put it another way, I’d not eaten enough en route! I consumed one of the gels I had with me and just had to wait for that to kick in.

We then turned left and started the main ascent, a 2.3 mile steeper stone path that was unyielding, coming in between 10-15% incline based on the data recorded by my Garmin watch. The group stopped a couple of times to collect the stragglers (me included) before heading onwards. And upwards.

At 16 miles, my little group hit summit number 2 and we joined the rest of the group for a food stop, huddled behind a dry-stone wall to keep warm; whilst it wasn’t windy on the tops, there was a breeze, and it was cold! 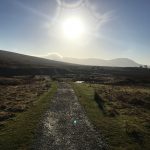 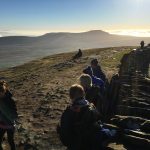 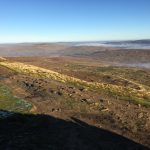 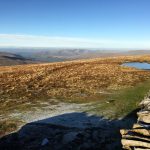 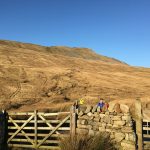 I was fed a Shot Blok, basically an over-sized wine-gum for runners to give me a much-needed energy boost and we headed down a path as steep as the one we climbed, with various members of the group doing unintentional acrobatics whilst negotiating some of the trickier bits.

The difference between peaks 1-2 and 2-3 is that the latter pair are next to each other. So 18 miles in we were outside a pub at the bottom of the third peak. The pub claimed two of the group, who had the sense to exchange a tricky climb for a pint and a plate of chips. Can’t fault the logic!

As we started I really began to feel my fitness level, or rather the lack of it. This initial path would be fine for fresh leg. Mine were telling me how good the pub option seemed to be! However, I’d come this far and had no intention of giving up. I’d have to come back and finish it another time for a start!

The stone path, being in the shade of the peak, was very icy. We walked on the frozen bog either side of it, jumping across when thawing had occurred. It was tough, but it was only a taster of things to come. By the time we caught up with the group below the main ascent it wasn’t just my legs that were lamenting not stopping at the pub.

Still a couple of Shot Bloks later and body was pointed towards the rocks and reluctantly started the climb. Which involved all available limbs. And then some! I could see the group snaking up the climb which, according to my watch was something akin to a 20+% climb. I was with the tail-end of the group with a lot of encouragement going on. Clearly the energy boost kicked in about two-thirds of the way up as I started to be able to make a bit more progress. At the top of this section it opened out and whilst still uphill, it didn’t seem so bad. The sun came out from its eclipse from the peak and the views were stunning. Up ahead was the col and I joined most of the rest of the group for a photo. 20.5 miles in and we’d hit the final peak. 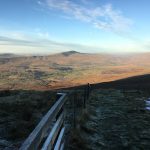 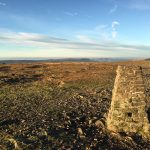 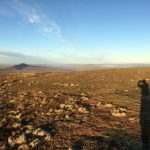 The descent, some 5 miles of it back to Horton was not simple. A bit of scramble, a load of rocky paths which had another go at removing my Snowdonia toenail casualty then some clambering over limestone. Finally some fields were were frozen enough to look solid until you stood on then and sank into the icy water lying beneath!

As we approached the car park which we’d left in the morning the GPS watch gave a distance of 25.5 miles, which was slightly further than we’d expected. Given I know people that would ask why I stopped at that point, I carried along the main road to round up the distance to 26.2 miles, much to the amusement of my fellow runners.

Apparently the two pubs visited by those who avoided Ingleborough, were very good!

And that was our post-Christmas jolly out into Yorkshire done. Hard work, but a fantastic route. Although I don’t think I’ll be rushing to enter the race in 2017!

If you want to view the Strava profile of the route, click on this link.