** Fluff warning – this is a statistics-based article and does not contain any pictures of, or any references to kittens **

I guess it’s as much to do with the time of year as anything else. One goes to the supermarket and where there were Christmas goodies on the shelves there are now diet products in their place and the world is worrying about how to shed the excesses that the festive period brought with it.

Despite my regular running and trying to keep in shape, I have an unhealthy ability to destroy a box of chocolates or biscuits in a time that would probably feature in the Guinness Book Of World Records, at least it would were I not too embarrassed to admit to the record.

Anyway, after the trail race last weekend I have at least managed to get out training again. No major distances admittedly, the old-faithful 8 mile loop through Marple village during the week and today a new 10 mile route taking in the Middlewood Way, which is a long-departed rail route now used as a bridleway between Marple and Macclesfield. The pace has actually been quite good although neither route is hilly – mild undulation at best.

After each run I do, I always check the data in Smashrun and Strava. This allows me to work out what went well and what wasn’t quite so hot. There are rarely any surprises doing this. I mean, it was me running the route so I tend to know how it went at the time, and the analysis is immediately after cleaning myself up afterwards, normally whilst consuming copious amounts of tea.

(There was an incident after Thursday’s run when I ran out of tea which nearly required diplomatic assistance, but we got there. New tea in cupboard, all is well again.)

I have always been interested in the numbers, as is quite apparent from previous postings. When one is racing, there is always the question “am I performing at my best”, “is it consistent”, and “can I do it any better”.

I guess my interest also stems from the ‘race predictor’ on my Fenix 2 watch. Over the 2 months I’ve been using this kit it’s begun to learn about my pacing over different distances and it is using a model (I’m not sure if it is Purdy or another) to come up with results. I’ve only started using this watch since the Chester Marathon, so it’s not had the wide range of distances that my old Nike+ watch was exposed to over the 3 years I used it (although it was far too simple a device to make any sense of the data). 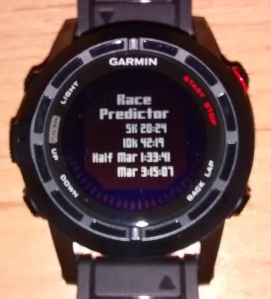 I found it interesting that my recent running has seen my VO2 max prediction drop slightly back to 51 (it was 52). VO2 max is a measure of the maximum volume of oxygen that an athlete can use. It is measured in millilitres per kilogramme of body weight per minute (ml/kg/min). This site gives a lot more detail about VO2 max including the ranges one might expect a person to be capable of, which is graded dependent on age and sex. Obviously an accurate test involves an intrusive analysis of the oxygen in the blood whilst undertaking exercise and as such, a number appearing on a sports watch which is only able to measure this via heart rate can only be considered as a guide.

But the upshot is that having stuffed myself with Thorntons chocolates throughout Christmas rather than going running, my body is slightly less efficient in how it processes oxygen.

I’ve put my best result at the distance next to it as a comparison:

So actually with the exception of the full marathon distance, the results are very close. I would suspect it’s a matter of interpolation of data being the issue here. With no data points between 13.1 and 26.2 miles there’s a vast area of unknown going on there. And apart from that, I’ve run the half-marathon distance at least 30 times and I’ve done 2 marathons. Hence the experience and the stamina at long distance simply isn’t there.

It got me thinking about what computer model the watch was actually using to make these predictions. In digging around the internet I discovered  ‘Purdy Points‘ which appears to be one of the original models for such predictions. In short it is a model whereby knowing the number of ‘points’ accrued for a particular distance, which in itself relates to a time to complete the distance, one can predict the time to complete a different distance.

Of course these models are always going to be an estimate; there is an implicit assumption that the routes will be comparable i.e. if the 5k route is mostly flat with a hill of a particular height in the middle, then the 10k route would also have this profile. Apart from that, one would expect the runner to be physically used to running the other distances i.e. one couldn’t decide tomorrow they were going to run a 100k route and seriously expect to get a result in keeping with that predicted from their 1500m Purdy Points and having never run more than 13 miles etc.

I found this website which is interesting because not only does it consider the Purdy model but also VO2 max, Cameron and Riegel models which it then takes an average result. This link gives a brief description of each of these models.

Again it would appear all four models need a single starting point of data i.e. a distance and a time taken. I decided that by using my half-marathon timings this would give me the most accurate guesstimate (that’s all it can be on a single data-point). as that’s the distance I have run the most.

I also ran the experiment using my 2014 benchmark pace of a 1h35m half-marathon alongside my 2013 figure which was more like 1h38m, just to see what the difference in the results would be.

Again, the results for half-marathon and below are pretty consistent (accepting that my best effort at the distance is sub both of these control times, but that I’ve only gone that quick on two occasions). I find the marathon result very interesting, especially in the light of what the Fenix 2 has assumed based upon it’s local knowledge of what my ticker is (and isn’t) capable of.

So what can I draw from all of this? I guess ultimately what the numbers are telling me is that for my current / recent levels of fitness, I’m actually performing at a level that would be anticipated for all long distances up to the Half-Marathon distance. Beyond that, I simply don’t have the experience in my legs and as such my actual performance is way off where it would be predicted to be.

There is, of course, the question as to whether I actually want to gain more experience at the 26.2 mile point. It all sounds great in principle, but after 22+ miles both body and mind get distinctly less interested and instead long for a hot bath.

And chocolate. Lots of chocolate…….

Be the first to comment on "A bit more running maths"