In many ways I wanted to have a little pause after the last of the lockdown narratives I’ve put together. Partly because there was a risk of sounding like a stuck record in a virtual Big Brother house (day 4086 and Simeon is rocking alarmingly in the diary room) and partly because other stuff has been going on.

The weird thing about the whole lockdown malarkey is that in most ways, nothing has changed. Except that a lot of people have started to try to edge towards their old normal behaviours again now that the country is relaxing. And despite the fact that actually nothing has really changed. The virus is still circulating within the population and medical treatments are still limited (although some drugs have been identified to help those most seriously ill be not quite so ill).

Work has become a thing again now that people can go on holiday. I’ve spent much of the last week (and plans for next week) gearing up for another summer season. Albeit significantly less busy than in 2019 although that’s not all bad as 2019 was too busy and I made myself overly tired in the process.

I’ve also started getting the run coaching stuff back together again. Mostly coaching within a club environment but I’m doing some private stuff as well which is good, especially after all the time of being away from people. Getting out on a Guided Run showing off some of the fabulous trails on hand is a nice way to spend a morning!

A return to Lyme

One new feature to the diary was that Lyme Park has started to slowly open up. I was in the group of volunteers who were some of the first to be called back. The Ranger team was tiny during lockdown which meant managing the estate was a mammoth task, just being able to get around and make sure all was OK. So bringing back the patrolling rangers was essential to help keep things safe and secure as the public have gradually returned. With no humans or dogs in the park during lockdown, the wildlife has thrived. One of the ‘issues’ has been that ground-nesting birds have taken to the paths and the deer have calved in many places throughout the park whereas they’d normally be firmly at the back of the deer sanctuary, well away from humans and dogs. 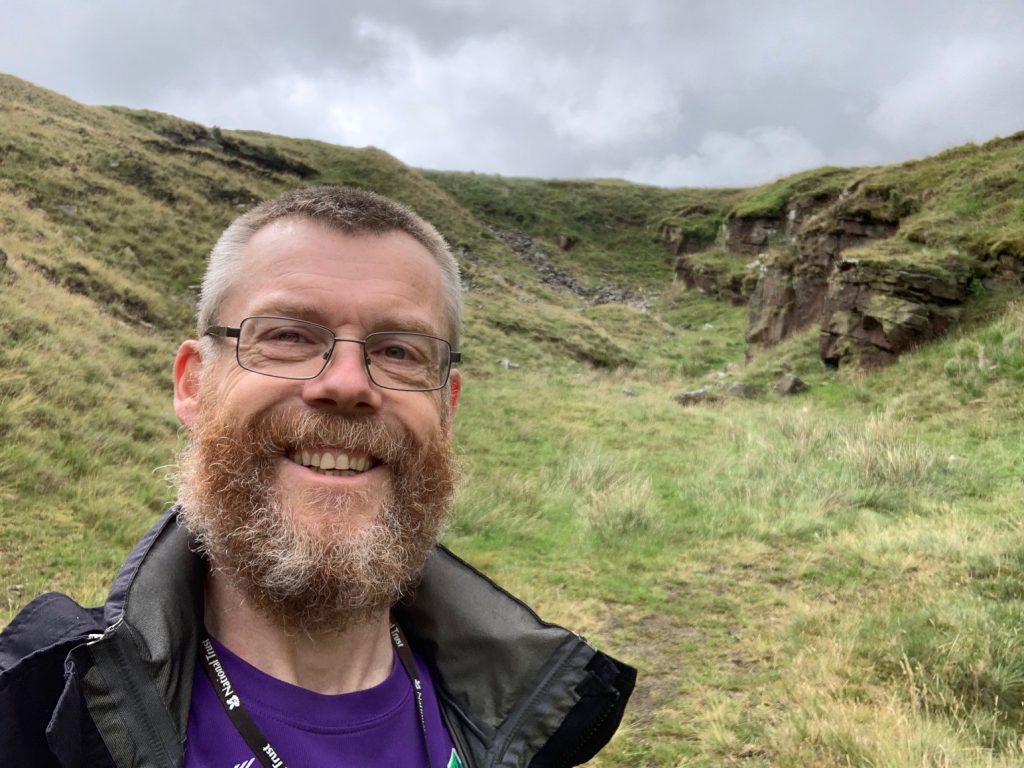 The Park, like many other NT properties have implemented a strict dogs-on-leads policy during the reopening, in order to protect the wildlife, which is now having to come to terms with sharing the space again with us. Unfortunately there are just a few too many members of the public who feel that the rules don’t apply to them. There are several sections of the park that had to be closed off to the public last year simply due to dog-attacks on livestock. But heaven forbid that any nasty park curator should prevent little Spot running wild and out of control whilst its owner is hanging their poo bags in the trees for someone else to have to clear up. Comments like ‘well my dog is well behaved and under control’ seem to entirely miss the requirement that ‘all dogs must be on leads’. 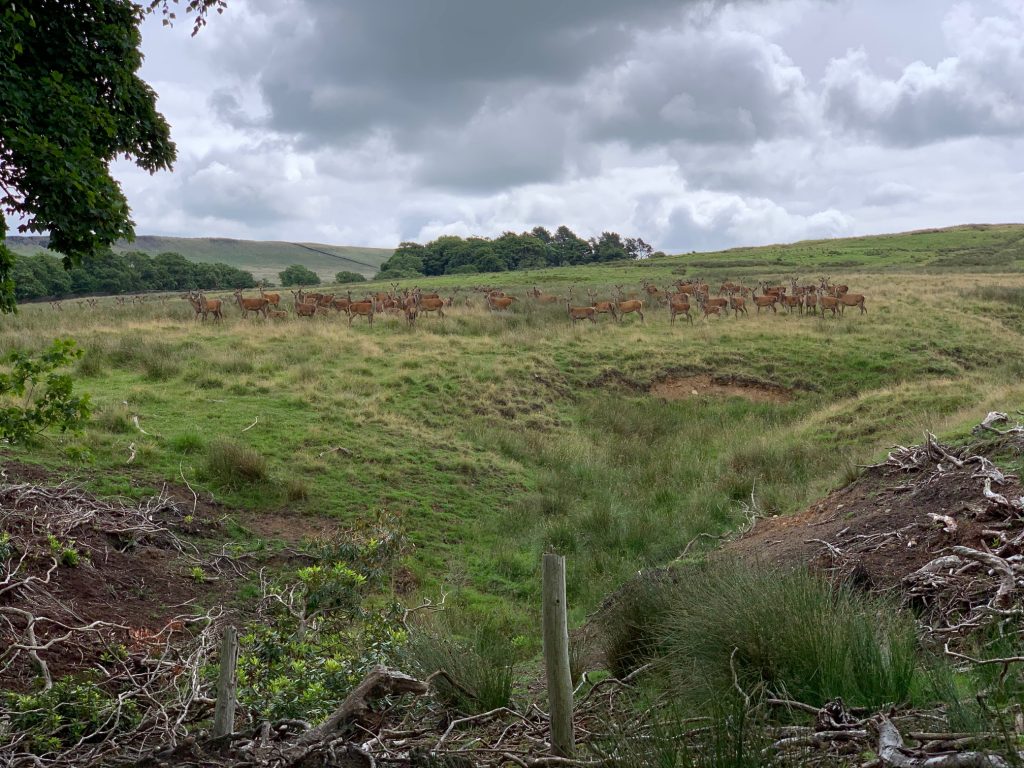 For now, Lyme Runners is still on hiatus. Despite the relaxation that allows everyone to pile into the pub after work, the guidance outdoors means that only small groups can meet up. Trying to operate this requires all my run leaders to be available which makes the whole thing difficult logistically whilst potentially not being able to take everyone along who wants to come. Some of the group are meeting up informally which is nice. Hopefully after the summer (and my busy work period) we’ll be able to restart things.

Fitness and all that

My exercise streak continued up until 24th July, being 117 days in total. At that point disaster struck and curtailed all exercise for the foreseeable future.

It was all going quite well. I’d run 3 sub-19 minute 5km races in the space of a couple of weeks. Which, to be honest, was too many close together as it took almost a week to recover from the last one. But from a spring of steady training it was quite nice to not only push the pace, but also to realise that I’m almost as fast as I’ve ever been, despite a few years older since I last tried. To be honest I had wondered whether it would ever happen again with my parkrun (remember them?) times seemingly getting slower over time.

It was nice to meet up with a couple of running friends from the Lyme group. They’ve been running in their ‘bubble’ for much of the spring with some super results from that training. As it happens we met up to follow a couple of different trail ‘race’ routes, one around Bollington plus the Trust 10 route in Lyme (adjusted a little for some of the closed sections of the park)

The Tortoise group has again been active. As usual the routes have been long, slow and as hilly as possible. Because that’s how we roll. 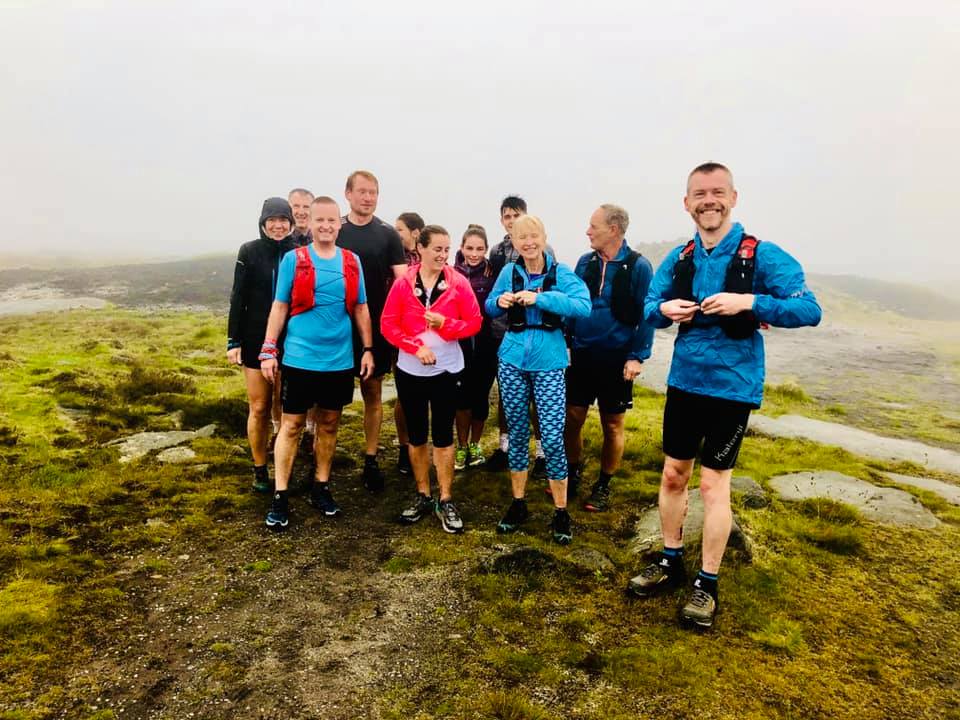 We had a disaster-filled trek up Bleaklow in the clag where nobody thought to confirm that the navigator actually knew where they were going. Whilst we got down mostly safely (most people fell at least once) it did highlight the importance of taking the right kit along, plus the need for competent navigation. Stupidly it was the one day I had taken the map out of my pack thinking that others leading the route knew where they were going; the map is firmly tucked back in there now! Lessons learned thoroughly.

So where did it go wrong? 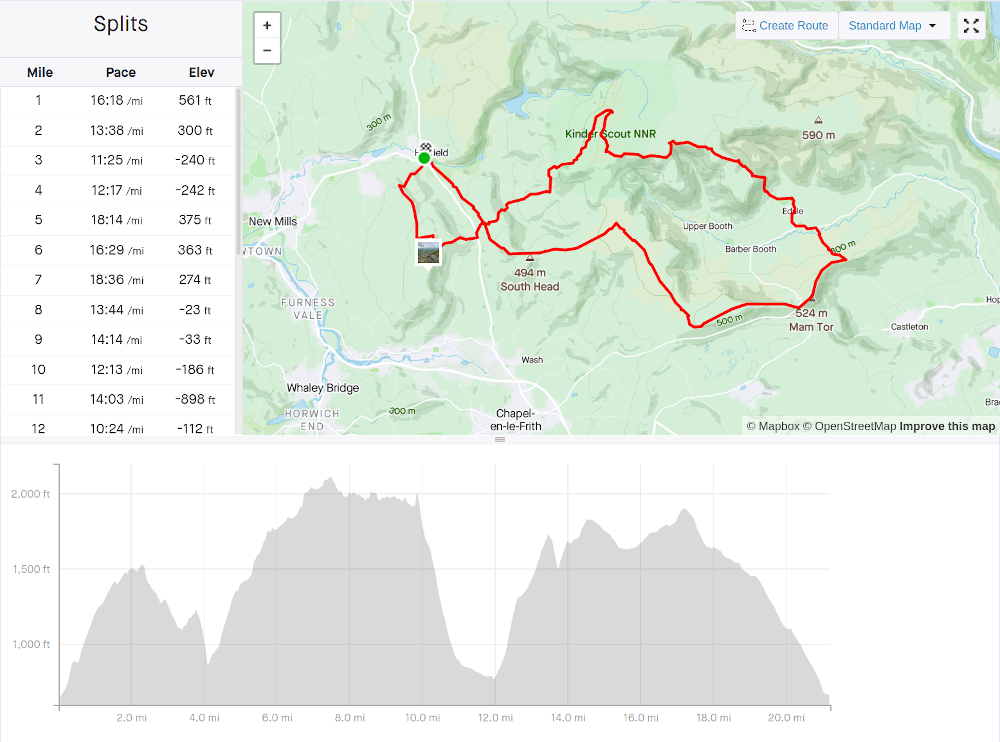 Friday Skive around the Peak District 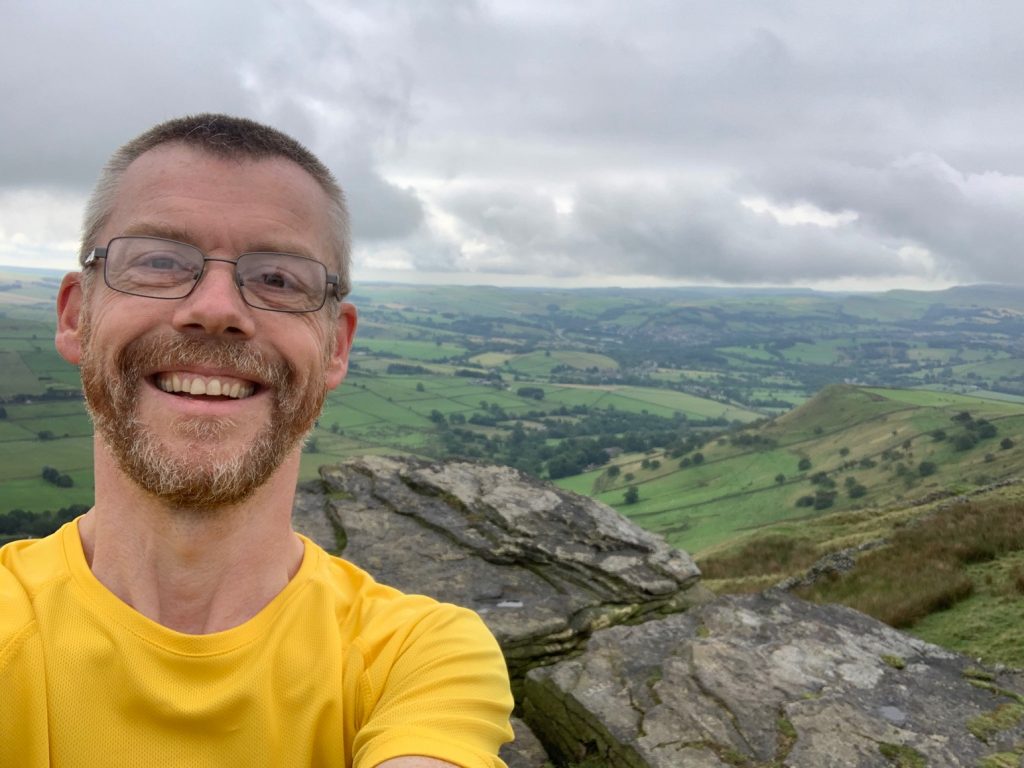 Oh yes, the lockdown beard has gone. My head looks peculiarly round now!

About 3 miles in as we headed up Red Brook, 3 of us, in rapid succession, clipped our left leg on a rock at the side of the path. We carried on, a little blood but nothing major. Except that my knee was really not happy about the situation. TO be fair, it was nothing more than a mild grumble for most of the time. But this changed into significant discomfort on the steep descent into Edale. Andy had a spare knee support so I used that for the rest of the run, but it was entirely damage limitation – I did even consider the train back from Edale but then it wasn’t straightforward retrieving the car from Hayfield. So it worked out more straightforward to keep going, albeit slowly.

It’s Sunday now and the side of my knee and top of my lower leg is sore. I can walk fine, although stairs are not my friend at the moment. No idea whether I’ve just bruised the bone or if it’s more serious than that. But madness that I’ve fallen hard off my bike and somehow caused less damage to myself in the process.

I don’t know how long I’m going to be out of action. Whilst far from ideal, I’m going to be busy with work in August so the training was always going to have to take a back seat during that due to the lack of time. The exercise streak would have been ended anyway. Aside from that, who’s counting? The important thing is hopefully that any damage is minimal and that things will heal properly and swiftly. 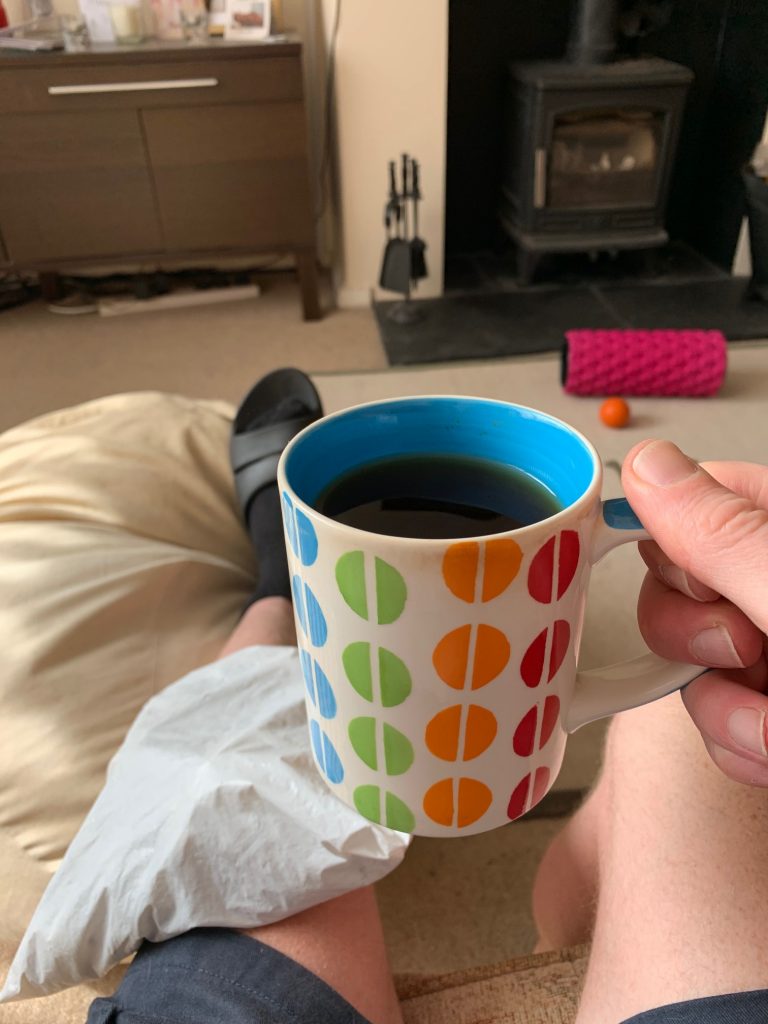 ’tis the bag of frozen peas

Not a lot has happened on the music front. There has been some sporadic piano playing and software synthesizer acquisition.

However I have begun my trip into the world of hardware synthesizers. I’d held off because they’re more expensive and I don’t really need more stuff around that doesn’t get used. However, the difficult with software-based synths is that they’re not very hands-on. Just like your more traditional instruments, having physical contact with the control of that instrument gives the player a much greater control over what they’re doing. Sure you can get a violin sample out of a computer and it sounds a bit like a violin, but without the ability to touch the strings and use the bow, it’s tough to produce a virtuoso performance. On a synth, having fine control to adjust the parameters is that equivalent that poking a screen cannot give. Of course the flip side is that the hardware itself is limited compared to a computer full of virtual synths, but it also helps to avoid the creative paralysis of having too many options.

Anyway, this is the Behringer Model D, a clone of the MiniMoog. You can get a version with a keyboard which looks extremely similar to the Moog itself, however at over twice the price I thought I’d just get the knobs and switches and plug my perfectly good keyboard into it to control it.

Needless to say there’s been a lot of poking and not much in the way of finished tracks.

In vague desperation to get something produced I hit record on the camera and played live into YouTube. A bit like when I did the classical pieces on the piano, only framed worse and being completely improvised. But it actually came out OK and you can find it here if you want to listen (feel free to subscribe to my YouTube channel and get me into double figures!!!).

Finally last night I pulled a few ideas together into a new track. Which involved some soft synths, the Model D. And my research thesis from 1996.

Be the first to comment on "A post-lockdown catch-up"