The last few weeks have been somewhat *complicated* to say the least, and as a result I’ve not been able to write or update the blog at all. The plan is to pull together a few articles over the next wee while which covers the main things I’ve wanted to say, but been unable to do so. However, I don’t want to have something which makes War & Peace look like a short story either and so I’m grouping it into more manageable chunks.

This weekend just gone I spent in my favourite place, North Wales. Driving less than a couple of hours west from the hubbub that is Manchester takes me into a world of hills, mountains and space. And it’s a great exercise in peace and relaxation.

Having spent many childhood holidays in and around the area it has been the sport aspect that’s brought me back in recent times, with a number of long distance runs being the attraction. Last year I added a cycle ride to that list, and returned again this year for another go at the Etape Eryri.

This is a cycle sportive (non competitive event) held in the Snowdonia National Park, setting off from Caernarfon Castle, along the coast, before heading off into the hills for a jolly before returning to the Castle. In 2015 there were four flavours of pain – the  Toddler course (Bach) which is 47 miles, Teenager course (Canol) which is 76 miles, the Grown up course (Mawr) which is 103 miles, and finally the sadomasochistic option which is to do all three back to back.

This year, like last I took my stabilisers along on the Bach course, although I met up with some colleagues who are far more experienced cyclists who went straight in for the Mawr.

I was a little concerned about how my legs would hold up anyway. The week before had been a ‘recovery’ week from previous events which will have their own write-up, and the net result had been a significant amount of running – 39 miles in 3 days – to clear my head. With only two days recovery time I did wonder if I’d pushed my luck, but thankfully all was well in Wales.

Caernarfon is a place that I visited on numerous occasions as a child. I don’t have many recollections of the town itself, only the marina area, which includes the swing-bridge entry and the coastal road away from the town. I’m sure the town has changed – I don’t think Wetherspoons were there 30 years ago (although I could equally be wrong as it’s not something I’d have been interested at that time!) – but the Marina area looks exactly the same, with car-parking on one side and a windy road on the other. 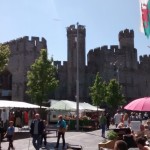 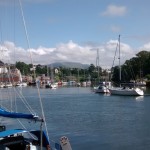 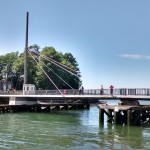 The weekend started with getting the bike checked out, and discovering that perhaps getting it serviced once in a while would be beneficial, with the gears not really wanting to play ball. But it was good enough to get around without any part of the bike or rider coming adrift from the rest so that was something.

I resisted on purchasing an event t-shirt on the grounds of having far too many t-shirts as it is. But I did get hold of some more gels and energy bars (can not have too many of these) and along with colleagues sat down for the pasta-party – basically all you can eat pasta for £6. It appears I can eat quite a lot of the stuff, but there is definitely a limit!

During the meal I received a message from a friend who was going to be feeding the cat whilst I was away. It seems that I’ve built a new porch since they last fed the cat, and as such couldn’t get in! Thankfully it’s only an overnighter and I’d left plenty of food out before I went anyway. But OOOPS all the same.

My colleagues on the longer ride set off at the crack of dawn (well, not quite – the sun had been up for 3 hours by 7am) whilst I tucked into a cooked breakfast. In a B&B it would be rude to to turn down the ‘&B’ at the end of the day. Given my hotel was within the castle walls, I only had a two minute ride to get around to the start line.

This year, I took the GoPro, although unfortunately it wasn’t tightened enough in it’s mount and filmed about 80 minutes of fast-moving tarmac and precious little else. So I can’t bring you footage of the views – unless you like tarmac, which to be fair is the same as in Stockport, but without quite so many pot holes.

I could certainly feel the improvement of my fitness over last year, even despite trying to kill my legs during the week. In fact the ride should have taken me a lot less time but unfortunately following the timed up-hill mile (which is in the photograph), another cyclist had a major coming together with an oncoming car on the descent which resulted in a road closure, two air ambulances and a whole host of cyclists carrying their bikes over barbed-wire fences and across scrubland to reach the road after the closure. Thankfully it appears that the doom-monger rumours about the fate of the cyclist were somewhat exaggerated, however at this time I believe they’re still in hospital being treated for non-life-threatening injuries.

This incident put a downer on the ride because there was a belief that it might have been a fatal accident (thankfully not) but I kept going and soon lost myself in the beauty of the Llanberis Pass. I soon found myself again at the top of the Pass when I met the strong headwind blowing along the route which was less than welcome! But at least it wasn’t raining.

The final hill in the last 10 miles finished me off in 2014. And again it appeared in 2015. I thought last year I was just weak, but it would seem that the hill itself is rather steep as well.

By the time I returned to Caernarfon Castle just under 3.5 hours after leaving it, I was ready to get off and go home. Which I did!

I got home to find a cat with a full bladder waiting to go out. It seems the litter tray is reserved for when the weather is bad! I also booked the bike in for a service 🙂

Be the first to comment on "Etape Eryri 2015: Cycle Sportive in North Wales"