What I mean is that it’s still blowing a gale but we don’t seem to be at risk of any frosts this weekend. But it’s June so therefore it must be summer.

It’s been a bit of a mess of a few weeks weather-wise. You think it’s going to be OK and plant out all the baby flowers in the garden, only to have them flattened by 50mph winds which we seem to have had for about a month now.

In fact I’ve made a good stab at trying to tidy up the garden, so it’s less like ‘the neighbour from hell’ and more like what is acceptable in a conservative neighbourhood. Not that it should matter that much, but I do like things tidy.

It’s probably fortunate I don’t have god-like powers otherwise nature would all be straight lines and perfect edges.

That aside, I’ve cut the lawn back so it isn’t in the midst of the flower borders any more. It seems mightily frustrating that grass seems to thrive anywhere where you don’t want it, but steadfastly refuses to grow in the lawn itself. 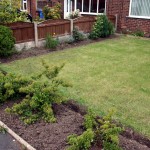 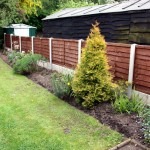 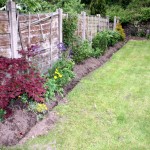 You can even see some of the plants now

Even the cat seems to approve. When I say approve, he’s discovered he can take refuge in the edges so the wind doesn’t keep waking him up!

The garden fettling has encroached on my sport of course however I’ve managed to get along to my Tai Chi classes and have managed a few longer runs.

The latest visit to the physio was a positive one and after 3 months I’ve been given the all clear although I still have a list of body-mangling leg stretches I need to do  to keep my hips where they’re supposed to be, rather than migrating up into my neck or something equally unplausible.

So a week ago I took my legs for a gentle bounce along the Middlewood Way – an old railway line between Rose Hill Marple and Bollington, condemned by Beecham in the 1960s which is now a route for runners and cyclists and a toilet option for horses, judging by the amount of manure on the path. Having got to Bollington, I ran up a few hills, got completely lost, asked for directions from a couple of dog walkers who seemed completely bemused that I’d be running back towards Stockport, and then continued back home – an 18 mile round trip and the longest I’ve done since the Chester Marathon in October 2014.

I will admit to being a little achy afterwards, but I think that’s allowed.

Clearly having gone a bit mad with the long distance I held off for a few days before going out again – at least it gave me the opportunity to relocate several plants in the garden and to straighten a few others flattened by the wind.

When I did venture out, I seemed to confirm my suspicion that all paths and tracks in Poynton inexplicably end up on the Middlewood Way, as if they get drawn to this mystical pathway. Either that or they were planned by the owners of horses wanting to relieve their animals on the Middlewood Way…….

Having gone for a flat run (mostly) during the week, I planned something a little hillier today and with the opportunity to get lost en route.

Confirmed, it was very hilly. Confirmed, I got lost.

But it was 14 miles of lovely views from the hills above the Cheshire Plain and forest paths before descending into Lyme Park. And no horses. Actually there was one who got in the way on the main road, but we’ll ignore him. It was blowing a gale as I went up the hills though, and the final ascent towards the Bowstones felt at times that I might end up being blown back down the hill (I’m only little).

I must start taking the camera out and sharing some of the views. I feel very lucky to be able to run from home to some great scenery without having to drive out there first.