It’s been over a fortnight since I managed to allow my knee to have a close encounter with a rock and whilst things seem to be improving OK, I’m very conscious that it’s a slow healing process.

A few days after the incident I was cycling around everywhere and getting about fine without any issue from the knee. If anything, it was the rest of me that tended to complain that it wasn’t working quite right. The joys of ageing I guess!

Anyway, after leading a coaching session on the Thursday and taking the knee for a jog around the park all seemed to be well. Enough so that I decided to join the group for a Saturday morning bounce around the hills.

Things started off OK, from home and then along the Middlewood Way which is to all intents and purposes, pancake flat. As I took the trail to climb up onto Sponds Hill (Lyme Park wasn’t yet open as it was pre-9.30am and I’m not one to trespass, especially given I volunteer there!) the knee began to remind me that it was not a happy joint. As in the previous long run, going uphill was uncomfortable, but not painful. Going downhill on the other hand….. 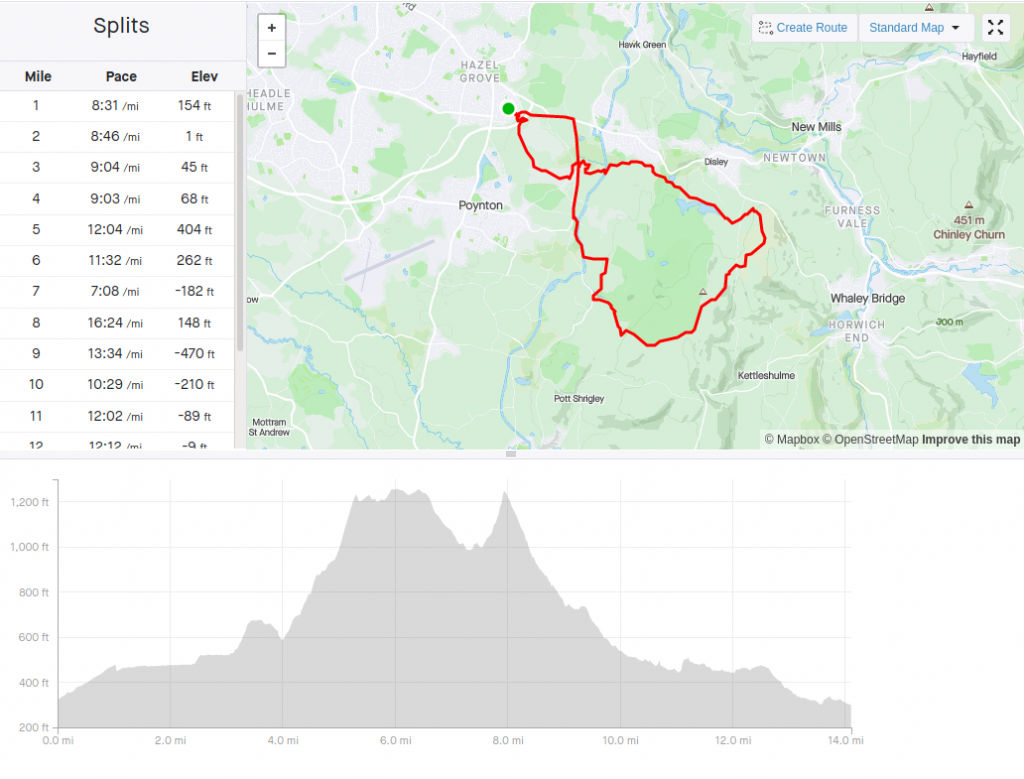 Coming off Black Rocks the knee protested a lot. We’re not talking about a steep descent or a technical one, it’s soft trails which are mostly even (with a side order of frisky cows). The result was a return home for a date with a bag of frozen peas and a knee shouting “Told you so!” for the rest of the day.

So we’ll not make that mistake again.

As it happens, it’s now August when my main job is at its busiest. So the opportunities to get out for long trail runs are limited at best. As such I’ve decided to give the running a good rest in the hope that whatever is unhappy in the knee gets better quicker that way. I’m assuming it’s a bruised bone as I can’t think what else it could be given that the impact itself was a glancing knock rather than a full-on assault between a knee joint and a lump of granite.

I have tried to keep the exercise going to some extent. Having spent 6 months rediscovering the fitness that had somehow gone missing over the winter, I’m not too ennamered with the idea of it going away again. At least not if I can help it. With many of the jobs requiring multiple visits during the day, I’ve tried to cycle at least one of them. The distances this time around are not great, at only about 90 miles for the week (in previous years I’ve driven that mileage on a daily basis, impressive given I was rarely more than 5 miles from home!)

And now, some music

Whilst there has been frustration from the exercise and sport point of view, I have had a breakthrough on the music side.

When I last posted I’d dropped back into a bit of a music rut. I’ve finished re-building my 1989-1991 album ‘Songs from the border‘ on modern kit and finally got it released via Distrokid and Bandcamp. So it’s (mostly) out there in the wild now if you go searching for the album title (or artist name No Emis).

I’ve had a long spell of block in the past and I was worried that I might struggle to get anything new out of my head for a while.

I always felt before that I tried to wait for too long to get a fully-formed idea and so I embraced a little bit more experimentalism with my working processes. An improvisation straight onto YouTube went fine, although I stupidly didn’t record the MIDI data at the same time which means that the track itself will need to be developed from scratch. That project has started but is firmly sat in the slow lane.

“Model D Asymmetry” turned out better than expected though and seemed to get some good feedback which is always nice. I really need to get my head around how to master tracks properly, but at the moment, just getting a raw track out into the wild is a challenging proposition.

Having discovered that the experimental approach actually generated something I could work with, I returned to NanoStudio 2. I’ve previously recorded a couple of tracks with it (Atmosphere and Sundance)  using the excellent Obsidian synth that comes with it, but due to it not processing audio files, I’ve tended to return to Cubasis which I find I can do most of what I want to do, most of the time.

There’s some interesting sound packs within Obsidian and in particular I like the industrial packs for the sounds they produce.

I’d love to say that a track wrote itself, but that’s not the case. I found some ethereal pads, some nice bass and drum patches and played with a chord sequence over about a week. Stuff was added, stuff was deleted but it sat in an unfinished state. Bizarrely it was finally obtaining a decent microphone stand that got my audio kit connected full time. I recorded a number of base tracks which I then pushed through the vocoder – maybe I’ll sing on a track one day, but I don’t think the world is ready for that yet. It may never be ready!

A pile of outputs from Nanostudio 2 plus these vocoded fragments failed to work in Cubasis. I remembered that one of the group in the Sound Test Room forum used Slate (the drum machine in Nanostudio 2) to fire his samples and following an afternoon with a lot of tweaks and pokes, I worked out how to do it myself.

It was the catalyst as the track came together very quickly after this. From scratching my head to suddenly having something that had me excited. It’s probably the weirdest thing I’ve done, and it’s headed more into Darkwave Electronica than I’d normally go. But hey, that’s what happens when you experiment, right?

Having gone somewhat industrial and darkwave in the last couple of tracks, I wanted to try something different again. I quite like that genre but it’s not really where I anticipated my own music was going. Aside from that, a couple of weird and dark tracks are great within an album, but I’m not sure I want to do a full album getting darker and weirder as it goes on.

I fired up Audiokit’s D1 synth in Cubasis. It’s a great synthesiser but tends to misbehave horribly in my DAWs – it won’t even load in Nanostudio 2, so I tend to go looking elsewhere for ideas. I’ve had a concept in mind for a little while but combined with the chosen sound, things started to form into an idea.

The Model D hardware synth was recorded live and sampled into the iPad to give me some new Jarre-esque wind sounds and some interesting basses too. It was quite nice to use it as a performance instrument for a change – that’s why it’s covered in knobs and switches after all, for immediate control.

A lot of tweaking followed and a track was recorded. In many ways it takes it’s inspiration from early Mike Oldfield and Jarre where they generated evolving tracks that took the full side of an LP. Except this is only 5 minutes, and more of an ‘edit’ of something bigger that I may create in the future.

So that’s where things are up to at the moment. It’s nice to get some music back in my life again after so many years absent and it’s nice to be able to get stuff recorded and online, if nothing more that I get to listen to it and work out where next, rather than it languishing forgotten on a cassette in a drawer.

Speaking of which, I’ve just found these (on a shelf rather than a drawer).

Exhibit 1 is the CD that contained the original 1989-1991 recordings of SFTB which had been transposed off a tape cassette from my long-defunct 4-track tape recorder. That tape I still have but as the 4-track recorded at double speed (better recording quality) it means the contents play at half normal speed in a normal tape player, so it’s of little use!

It predates me using the ‘No Emis’ artist name and I spent years wondering how I could have a name that didn’t look as cool when listed as a composer such as Lennon/McCartney!

The sound quality is awful, but it’s the best I had of those originals: 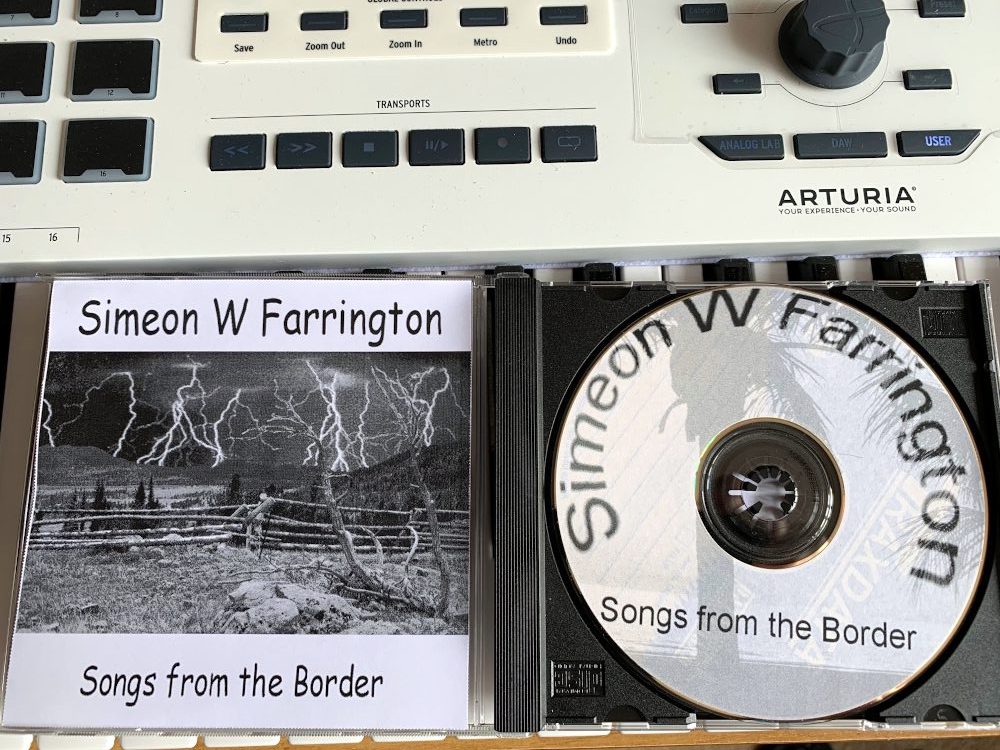 Original vintage CD of Songs from the Border

To be fair this wasn’t missing. It’s been close by whilst I was re-programming the tracks as I was trying to get as close as I could to the originals.

And more from the archives

This next find is actually a lot more intriguing: 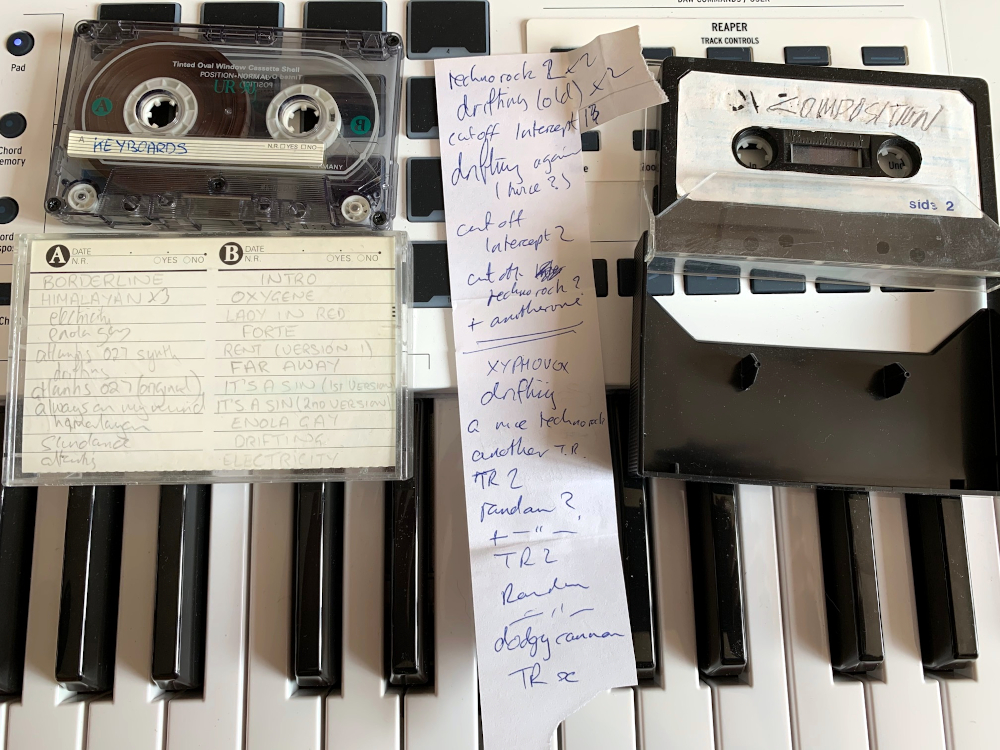 Aside from documenting that, once upon a time, I had legible handwriting. By which I mean I can still read it, something that can’t be said with my 2020 handwriting. In fairness I think the FBI/MI6 would struggle to decode my handwriting these days, such is the curse of only using a computer to write anything down!

So on the first tape I’ve got a list of many of the tracks I programmed versions of back in the 1980s. I know there’s a number of different versions of some of the cover songs as I gradually learned how to program Notator on the Atari. But that isn’t the thing that’s piqued my interest.

It’s the second tape that I didn’t know still existed. This is really early stuff and I’ve not heard it in 30+ years.

Spoiler alert, it’ll be really terrible I’m sure as it was recorded from consumer-focused mini keyboards that weren’t the best, and which tended to be overlaid with preprogrammed backing tracks. Interestingly (but not surprisingly) there’s a load of versions of Drifting on the tape. It was a track that went through dozens of iterations. Literally dozens, I shudder to think how many versions that existed over that time period.

‘The Intercept’ was actually the first stuff I ever chose to hit record on and whilst I remember it, it’s only in name form. I’ve no idea whether there was a decent tune involved, nor if it was anything other than me sitting on a keyboard whilst a backing track clicked away in spite of it. I remember being quite proud of it back then. But I did have a very sheltered childhood!!!

Technorock was the follow-up to Intercept and I only remember that as being particularly terrible and reliant on backing tracks. Looking at my hand-written list throws up some ‘gems’ Apparently there’s ‘a nice technorock’ which suggests that there were others that were less ‘nice’. And I love the fact there’s several tracks listed as ‘random’ which means I clearly didn’t think enough about them to give them a title! And “another one” – literally the title bestowed on it! Hah!

And your guess is as good as mine as to what “Xyphovox” is, although the word ‘terrible’  is almost certainly going to feature in the description! “Dodgy Cannon” sounds like it could be fun, but not necessarily in a good way.

Thank goodness I still have a tape cassette player. No idea whether the contents of the tapes have survived  30+ years of being ignored. It’s quite possible that if they haven’t then that’s for the best. I’ll let you know in the next instalment!!!

Be the first to comment on "A lack of running (but hey, new music!)"